78% of people turn to faith before eighteen 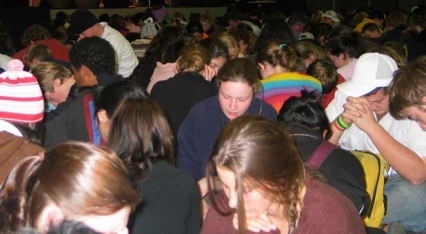 Youthworks has issued a renewed call for churches and families to work together to support youth and children’s ministry after the release of detailed statistics on young people in churches.

The majority of Sydney Anglicans say they become Christians before turning 20.

The research shows the majority of Sydney Anglicans say they became Christians before the age of 20. Local church youth and children’s ministries were the most influential activities on their coming to faith, followed by camps or conferences and church services.

However, it also highlights the challenges of retaining church membership for people in their twenties.

“Seventy-eight per cent of people turn to faith in the years up to age 19, and 46 per cent in the teenage years,” says the Rev Ed Springer, Youthwork’s Head of Ministry Support. “That just encourages us to keep young people’s ministry a key priority in our churches.”

78% of people turn to faith before eighteen

The need for intentional ministry

The report covers questions commissioned by Youthworks in the 2016 National Church Life Survey and was written by Anglicare researcher, Dr John Bellamy.

“Another finding that struck us was that there is room to grow in how we do our intentional young people ministries,” Mr Springer says. “We need to also equip parents to be active disciplers and to encourage the whole Christian body of all ages to be involved.”

All ages need to be involved

Mr Springer is referring to the report’s findings on the effect of childhood “spiritual activities” on current church attenders up to 35 years old.

Christian parents are the most significant people in faith development

“It mirrors a report from 2011 which said the most significant people in faith development are still Christian parents,” he says. “When they actively read the Bible, pray and then to a lesser extent, discuss Christian things or talk about questions and doubts, that helps young people stay in church because they're getting support in their relationship with Christ from multiple angles.

Young people stay in church when they are getting support in their relationship with Christ from multiple angles.

“Our parents need to know that they can help – other than just making sure their kid goes to church, which is still good. But actually discipling their children with the church's help, we see that as a real opportunity for growth in the Diocese.”

The real challenge is to retain youth into adulthood

A challenge for churches across the world is to retain youth and children attenders into adulthood. The report found retention for Sydney Anglicans, at 59 per cent, was slightly better than the average for other Anglican or Protestant churches but Mr Springer warns the dangers are real.

“It’s not as bad as overseas. We know that a certain percentage of young people will choose to walk away from Christ at some point… this is part of the adolescent season. But the important finding is that there is no data that youth come back to church in their 30s.

"There is no data that youth come back in their 30s"

The transition is a serious danger point

“People will sometimes say that kids wander and then come back. Actually, the data doesn't say that. So we, at Youthworks, want to keep saying intentional children’s and youth ministry is very, very important but it must be coupled with the home and the church being involved. because the transition from our siloed specialist ministries into the body during their 20s is a serious danger point.

“If young adults are not connected to the body then, statistically, they struggle.”

One of the surprising aspects of the study came from a new survey question, which asked about the parents’ commitment to Christianity when the respondent was in junior high school.

Says the report: “These results also show that, contrary to what may have been expected, about four out of 10 current church attenders did not have at least one parent who was a committed Christian when the respondent was 12-15 years of age. For a large minority of church attenders, then, Christian faith formation may not have been the result of having been brought up within a committed Christian household.

For many  Church attenders, Christian faith wasn't the result of a Christian household

“This finding is consistent with the presence of an alternative pathway to faith formation, which relies upon conversion and joining the church, apart from family upbringing.”

Ed Springer says this particular finding is encouraging for outreach in the community.

“Youth ministry is a very significant time for young people coming to faith from non-believing families,” he says. “That encourages us to keep looking outward, helping build pathways from local friends, from school, into churches where faith development can be explored.”