What motivates us to #ChooseKind? 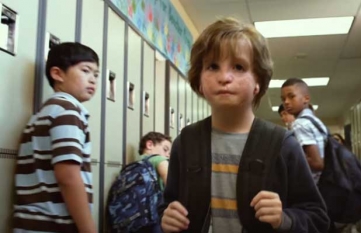 No one has greater love than this, that someone would lay down his life for his friends. John 15:13 - HSCB

Wonder begins with a heart-felt monologue by the excellent child actor Jacob Tremblay. Tremblay plays August (Auggie) Pullman, a 10 year old boy with a severe facial deformity who is starting school for the first time.

Tremblay’s elfin voice combined with beautiful images of him and his family bike riding, fighting with lightsabers and eating together  - everything that an “ordinary” family would do, provides a whimsical beauty which carries through the movie.

Wonder is a powerful movie that shows the importance of being the bigger person, standing up against bullies, and choosing kind. The movie, based on the best selling novel by Raquel Palacio has generated the #ChooseKind movement, in which people are encouraged to tally up the choices they make to be kind and look out for others. Although the “choose kind” message could be expressed more subtly than being directly introduced by Daveed Diggs, the teacher of Auggie’s year five class, it is a message which resonates long after the final credits close. Director Stephen Chbosky specialises in these kind of emotive, honest movies, such as his successful Perks of Being a Wall Flower.

Wonder provides a reminder that we all need

As society becomes increasingly more extreme and isolated, the message about caring and listening to each other that Wonder highlights is extremely relevant. From a parent’s perspective, Wonder reminds us of the volatility of the relationships children and teens form and the lengths they will go to maintain their social status. The way the plot enters around Halloween, a holiday where people are able to change their identity, and ultimately leads to Jack Will suggesting he would rather die than look like Auggie, provides a fitting metaphor about our desire to blend in.

It’s a message kids and teens need as well. By choosing to base the movie around the same structure of the original novel, Chbosky is able to portray many different first person perspectives around the core narrative. This allows for a large number of monologues and points us the motivations each character has for behaving the way they do.

However, these motivations are lacking

A key issue with Wonder is a lack of clarity behind characters motivations. Perhaps this is a result of moving the content of a book to become a time feature film, but it results in character development which is forced and stunted, particularly in the different reactions to Auggie. At the opening of the film, most of the kids are taken aback by Augie’s face and avoid him. Gradually, there are various examples of them softening towards him, but this is overall unconvincingly portrayed.

Jack Will is the first person to sit with Auggie in the cafeteria, he seems to be an archetypal hero figure. His eventual betrayal of Auggie provides a refreshingly honest break from the binary division between good and bad characters, but his motivations are never fully fleshed out. The devastating moment when Jack Will says if he looked like Auggie, he would kill himself and complains that Auggie has latched onto him is never fully reversed. Jack Will clearly wants to be friends with Auggie again, but there’s no explanation for his change of heart.

Similarly, when Summer sits with the newly abandoned Auggie, she has no answer to why. She insists that she hasn’t been asked to by a teacher, and says “I wanted some nice friends” but gives no real indication as to her sudden decision to befriend him, nor what makes Auggie a “nice friend”.

The key example of this is towards the end of the play on school camp, some year 7 boys find Augie and Jack and immediately begin to physically attack them. Then, his former tormenters from year 5 rush to his defence. The reasoning for this is sketchy at best. Perhaps there is some sense that year fives have to band together against the formidable older teenagers? Auggie doesn’t question it, as he begins to cry happy tears while looking out at the sunset, it seems all is forgiven.

It’s a beautiful image, five boys standing together in a row, but it is ultimately unsatisfying. It could be argued that this is a symptom of transferring the content of a novel into a two hour movie, but it is something more than that.

The missing piece to Wonder is that without the message of God’s love for us, our kind actions will always be self centred.  It’s the news that God sent his son to die in our place that informs our attempts to love those who aren’t like us. Without the gospel, our motivations to #choosekind will fall flat. They will always be self based, short lived and flawed.

It is when we capture the view of Jesus that we truly can see why it is important to love those who are vulnerable. And why it is such a disgrace when we fail to do so.

So watch Wonder, with your eyes wide open and be ready to cry, but then be ready to remind yourself: there is more than this. Our motivation to choose kind shouldn’t just be a tearful monologue or a beautiful soundtrack,  but instead the knowledge of God’s love for us.

Some helpful questions for watching wonder with your family