Similarly, I know of someone else who became a Christian by, literally, walking in to church off the street. They met people, looked regularly at the Bible and came to know Jesus as Lord and Saviour. I praise God that this happened, and I praise God that people still walk in off the street, stirred no doubt by the Holy Spirit. But again, to formulate a strategy around an anecdote will not do.

The starting point for any strategy must be an accurate understanding of where you are. The recent Mission Report to synod included this somewhat alarming graph. While measuring itself is a difficult exercise, the best estimates lead to the conclusion that, as a network of Sydney Anglican churches, our growth is barely keeping up with population growth.

This is not to suggest, by the way, that the previous Diocesan Mission was a failure. To the contrary, the aspirational 10% goal was a catalyst for many good things. That was its articulated intent, and this was achieved. Furthermore, we should praise God for the thousands that are now in churches that previously were not. Good things have happened. 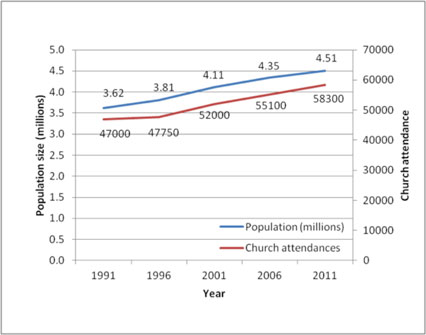 But as we now seek an updated understanding of where we are up to, as a Diocesan network of churches, the graph above demonstrates the stark reality that we are not growing in real terms. One can only speculate as to what the situation might be if we didn’t take the initiatives that we have.

And yet, whatever may have been done at a human level, it has been insufficient to see a greater proportion of Sydneysiders being part of God’s kingdom in our churches. Our Archbishop said in his recent synod Presidential Address that ‘in the next stage of our life together as a Diocese, our mission needs to be refreshed and sharpened, as we learn from the last ten years.’

This is certainly true, and perhaps something even greater in scale is needed. For, if you keep doing what you’ve been doing, you will keep getting what you have been getting, humanly speaking.

The starting point for our reflection should be a Gospel sense of urgency to reach more of a lost city for Jesus. The sobering reality is, despite many new initiatives and good ideas, there is scope for even more progress.

How prominently does this concern feature in your plans for 2014 – individually, among your church, and beyond your church?