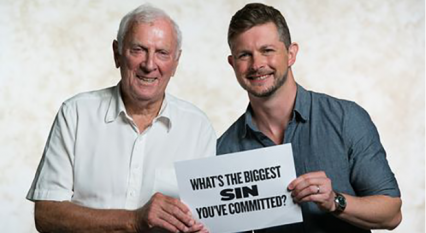 When a producer working for the ABC asked me to be one of a group answering questions on You Can’t Ask That, I’d never seen the show.

It was pretty clear why I’d been invited. The media needs conflict to create stories that we will watch or read. In particular, shows like You Can’t Ask That are often created by private companies and then bought by the broadcaster, which means they need enough spice to be sold twice over: once to the purchasing executive, and a second time, to us, the viewers.

So, again, the “Why me?” was obvious. Even though (I’d like to think because) I am an evangelical and Reformed Anglican, and therefore pretty biblically conservative on sexuality, I was not supportive of the decision of Standing Committee to donate a large sum to the Coalition for Marriage last year. The ABC producer had seen my name and face in the newspaper and had listened to a sermon I’d given on the postal vote. I’m guessing he thought that I would be good for a few fiery sound bites.

In this, Australians working in the media aren’t any different to most of our better-informed neighbours. With a few exceptions, they are raised on the same stereotypes of the church. Ministers are either megachurch pastors or downtrodden pastoral carers for migrants and the aged; either mouthpieces for the denomination or outspoken and charismatic mavericks.

I am, of course, neither of these. I’m deeply thankful for my Sydney Anglican heritage, in which I was converted, discipled, trained and ordained. It seemed unlikely that anyone more positive about my church fellowship, or orthodox on matters of Scripture or gospel, would be invited in my place.

The opportunity to share the joy of proclaiming Christ in partnership with a healthy congregation of gifted and committed saints was too great to pass up. So, despite having once been told that I had a great face for radio, I didn’t feel in any position to refuse.

I’d agreed to go on the show months in advance, but everything came together at the last moment. A number of the priests interviewed were travelling from interstate, so their interviews were locked in first and those of us from Sydney worked in around them. I got the call a week out, but dates kept shifting. Even on the morning of the interview, I was told that a slip in the schedule meant that I would be filmed not on my own but alongside a retired Roman Catholic minister, Tony Doherty.

In a post-Christian era, our culture is fascinated by the Church

Not much of what I was asked or said made it to broadcast. Tony and I were interviewed for over 2½ hours. Only a couple of minutes were shown. That’s not malicious, or deceitful. It’s just the reality of the media. They have a story they want to tell, and a limited amount of time in which to do it. I do regret not heeding my earlier media coaching (from back when we were rebuilding Barneys), because I should have prepared more sound bites. I’m a long form kind of guy, which doesn’t translate well to the screen.

Here’s what I’ve taken away. In a post-Christian era, even in the wake of the tragedies exposed by the Royal Commission into Institutional Child Abuse, our culture remains fascinated by the church. And by “church” they still think of the clergy and liturgy more than a gathering of diverse, everyday people who hold deep gospel convictions with humility and love.

As the experience of churchgoing becomes less and less common, I’m convinced that the opportunity for churches to surprise their communities with Jesus is greater than ever.

The Rev Mike Paget is rector of St Barnabas’, Broadway. The Priests episode of You Can’t Ask That is due to air on August 29. It can also been seen on ABC iView.