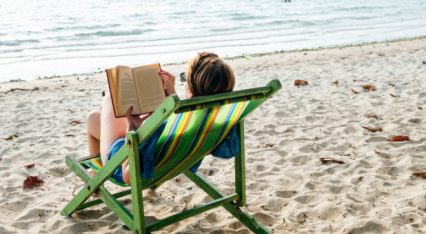 As February arrives in our calendars, and the hot and humid weather continues for another month, we are all grateful for summer holidays to energise us for this New Year.

January is a well-loved month of holidays for most Australians, with special events spanning the month from New Year’s Day to Australia Day. These festivities are only interrupted by the perennial “back to school” advertisements, which I loathed as a child as I thought the reminder was spoiling my holidays! The word “holiday” is a contraction of the phrase “holy day”, a day of solemn rest in the Old Testament and a concept that grew to such magnitude in medieval times that the Reformers substantially eliminated holy days, as they had become days of superstitious observance, depriving the economy of sufficient working days.

Some Reformers – like John Knox – even banned Christmas, arguing that Sunday was the only day of rest and worship for the people of God under the new covenant. Even today, in some Presbyterian churches in Scotland and the USA, you will find no church services held on Christmas Day unless it falls on a Sunday!

Living in a country that promotes rest

We should be grateful for living in Australia, a country that not only recognises Christmas Day but also Easter Day and Good Friday. These statutory holidays are clearly Christian in character, though I have yet to meet a non-religious person who does not enjoy the added holidays! We have, of course, other secular holidays, but the three great Christian festival days (along with Anzac Day) have specific industrial provisions that protect workers, so that they, too, might enjoy some added rest, without an obligation to work.

The rhythm of work and rest is a biblical rhythm, founded in creation and expressed in the fourth commandment. The seven-day pattern of six days of work and one day of rest continues into the new covenant, because the end of the age when we enter God’s Sabbath Rest has not yet arrived.

Adam was not created for an endless succession of days in the Garden; rather his days were modelled on the heavenly pattern of God’s creative activity: six days of creation and a seventh day of rest. Accordingly, “God blessed the seventh day and hallowed it” (Genesis 2:2-3). After six days of work, Adam was to rest and contemplate the ultimate goal of entering into God’s eternal Rest. In other words, eschatology was built into creation from the beginning.

Adam was, in a way, on trial: placed into a world where sleep was a necessity, physical tiredness a reality and temptation a certainty. If Adam had been faithful and obedient, he would have been transformed into a new age, a world without temptation and without tiredness, where he would “run and not be weary, walk and not faint” (Isaiah 40:31; cf Revelation 21:23-25). God’s Sabbath Rest was created for Adam to enter, irrespective of the entrance of sin.

We are enabled to enter God's eternal rest

Paul alludes to this reality in 1 Corinthians 15:44, where he argues that Adam’s existence in a physical body was indicative of his being prepared for a spiritual body. Of course, Adam’s sin ruined this prospect. It was to be a second Adam who “to the rescue came”. Jesus’ perfect obedience redeemed us from the penalty of sin and opened up the prospect of entering God’s eternal Sabbath. Under the new covenant, while we come to Jesus for rest (Matthew 11:28-30), the promise of eternal rest is still future.

The reason for a weekly Sabbath, therefore, has not been abolished.

The author of Hebrews makes the same point in chapter four. Furthermore, by reference to Genesis 2 and Psalm 95, he declares that “there remains a sabbath keeping for the people of God”. The word “sabbath keeping”, often translated as “sabbath rest”, is unique and does not appear elsewhere in the New Testament. It appears to be the author’s own invention to pick up the verb for keeping Sabbath and make it into a noun. It refers not to the eschatological Sabbath, where the author uses another Greek word, but to the weekly Sabbath for Christians.
Although I realise this is contested by some Christians, the applicability of the Ten Commandments under the new covenant is clearly part of Jesus’ teaching (Matthew 17-20), Paul’s teaching (1 Corinthians 7:19) and the doctrine of the Anglican Church, as evidenced by Article vii. For this reason, Cranmer inserted the reading of the Ten Commandments into the service of the Lord’s Supper, inviting us to respond after each commandment: “Lord, have mercy upon us, and incline our hearts to keep this law”.

In the midst of busy days and the stress that seems to engulf us so easily, let us all take advantage of the weekly rest that God has provided, and let us contemplate the work of Christ who has enabled us to enter God’s eternal rest in the new heaven and new earth.