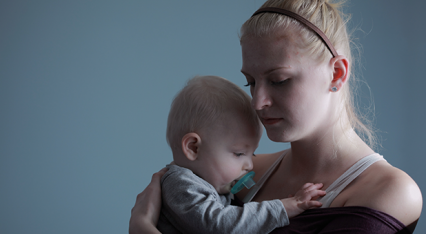 It was a social worker at a baby sleep school who told Leisa Bonaventura she had postnatal depression and sent her to hospital.

But Bonaventura wasn’t just tired. She cried a lot. She felt like she was losing patience with her son, Sebastian, who was eight months old. “I would go from zero to 10 in a split second and get really angry. I scared myself a little bit.

“I was pretty much at the point where I did not enjoy being a mum. I thought that if I could go back and not have a kid, I probably would have. And that made me feel terrible. I thought I was supposed to like it, and that it was going to be the best thing that had ever happened to me.

“It was so much harder than I expected.”

In the lead-up to being admitted to hospital, Bonaventura had withdrawn from most of her important relationships.

“I had started having panic attacks, particularly about leaving the house. I feared being late to things.”

She says the panic attacks often happened before Bible study at Church by The Bridge in Kirribilli.

“Sometimes I would be running late for Bible study and think, ‘I’m never going to get there on time. I’m going to have to walk in late, and everyone’s going to know I’m disorganised… and then I’d freak out and just not go. [It was] too hard.”

Up to one in seven women will experience postnatal depression after giving birth, according to statistics from Beyond Blue. Eighty per cent of new mums do get post-baby blues in the early days – feeling tearful or overwhelmed, which usually passes before long without specific care, but with lots of support from family and friends. Postnatal depression, though, requires professional help.

Bonaventura and her son spent six weeks in the mother and baby unit at St John of God Hospital in Burwood. The staff helped her develop a better attachment with Sebastian and assisted with sleep training. By the time she left, she felt like a new person.

“I wasn’t fixed completely, but I was well on my way,” she says.

Sarah Condie, the women’s minister at Church by the Bridge, visited Bonaventura every week while she was in hospital. She was one of the few people Bonaventura would allow to visit. When Condie first arrived at Church by the Bridge as their women’s minister, there were 30 babies who had been born in the previous two years. The baby boom meant new mums were a top priority in her new role.

Condie believes churches have a huge role to play in preventative measures that can help communities deal with mental health issues – including postnatal depression.

With her husband Keith, Condie co-directs the Mental Health and Pastoral Care Institute, a project of Anglican Deaconess Ministries. The institute aims to provide biblically informed pastoral care that “alleviates distress and promotes wellbeing, especially to those suffering from mental illness”.

Through a grant from Fuller Seminary in the US, she is developing a series of three short courses for first-time parents, particularly mothers, on building resilience. She is working with Lyn Worsley, a clinical psychologist and director of The Resilience Centre, who is also a member of Church by the Bridge.

The course was trialled at Church by The Bridge late last year with a view to making it available to other parishes this year.

Worsley says resilience is a threefold process, not an entity in itself: “It’s the development of personal competence, the ability to navigate available resources and doing both of those things in the face of adversity”.

In her research, Worsley has identified seven external factors that help build a resilient person: partner, family, skill, education, friends, community and money. She says a person needs at least three of these factors to be more likely to recover and grow from adversity.

Identity, she adds, is probably the biggest issue new parents face, stemming from a loss of or significant change to many, if not all, of those seven factors. For example, if a parent has left work to look after a new baby, they’ll lose three factors all at once: skill, community and money. But actually, staying home with a new baby will most likely affect all seven of those external factors.

“People having babies are having to renegotiate who they are,” she says.

“[They] are in a major transition in their lives, where many – if not all – of their strengths have been removed or changed. They have to find new ones.

“The resilience course helps them to look at the strengths they’re shifting away from and towards, how they can orchestrate it so they don’t spend as much time in transition and are able to move quite quickly into the next stage, without any mental health crises.”

Worsley stresses that the course isn’t going to “give” new parents resilience. Rather, it puts them in an environment where they have the opportunity to navigate and associate with people as they go through big life challenges.

She says resilience is based primarily on the quality of one’s relationships. This is why research suggests that people who are part of faith-based communities have higher levels of resilience, “because they have good connections with people”.