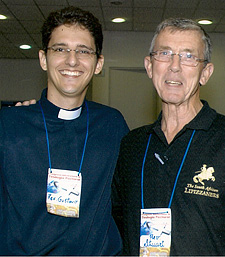 Recently Sydney based Canon Stuart Broughton (my husband) spent a hectic eight days on a reminiscent return to South America where he had previously spent 15 years as a missionary with SAMS UK.

The purpose of his visit was to support the diocese of Recife, Brazil in its first International Congress of Pastoral Theology in Joao Pessoa, another huge city in North East Brazil. The reason for his invitation was that he and his family were the first SAMS missionaries invited by the then Bishop, Edmund Knox Sherrill in 1970 to open up this enormous area of the North East.

The work has grown from the original city of Salvador, Bahia to many other areas. Sadly over the last year or two divisions have grown up between the evangelical North East and the liberal Province of Brazil which resulted in the Bishop of Recife and a good number of his clergy being excommunicated. This is a similar situation to that in USA and Canada which has caused the rift in the Anglican Communion.

I and a group of ex-SAMS missionaries were able to do a partial work of reconciliation while working as translators at the Lambeth Conference a year ago but the doctrinal splits seem too great to reconcile.

Stuart was particularly thrilled to see the number of capable young men and women already trained and working, usually part time as very few receive a salary from the church. Others are in training and several are waiting until they can get the finances needed. There is a very capable and accountable leadership with many on-going projects which are being carefully and successfully run, providing incomes and serving the community.

It was heartwarming for Stuart to be reminded that it was through the pioneering efforts of himself and others, plus the financial help of SAMS (UK) that this evangelical diocese exists and is growing in spite of all the difficulties.

He is pictured with the Rev Gustavo Branco, a lecturer at the Anglican Theological College, and one of the keen young clergy. There are others just like him who need our support.

If you are interested in contributing in any way, please contact Stuart at stuartrbroughton@hotmail.com or St Andrew's, Abbotsford.