Christ’s child amid the casework: The Bidura Effect by E.P. George 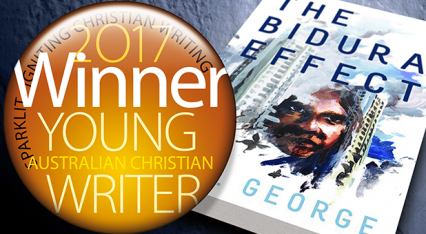 These days it’s common for young adults to attract bad press for their attitudes in the workplace. But in the pages of this book we meet an impressive young woman, nicknamed  “Twenty-one” by colleagues to mark her age, as she begins her career in social work for the department previously known as DoCS (Department of Child Services).

While facts and names have been changed to protect the families and caseworkers involved, the book is beautifully written and compelling; at times I couldn’t put it down, at other times I had to put it down and take a breather.

The Bidura Effect takes us behind the scenes into the heart of DoCS, revealing both Twenty-One’s courage and the fears and vulnerabilities lurking in her own heart as she faces new and confronting experiences as a young caseworker and a Christian. So it’s no surprise the book won E.P. George last year’s SparkLit award for Young Australian Christian Writer of the Year.

Twenty-one’s role takes her right into The Block in Redfern, a place only previously known to her as an item on the news, where she first encounters the dark shadow of Bidura. When Twenty-one inherits Doreen as a client, she’s introduced to a shameful period in Australia’s history that was unknown to her.

The recent Royal Commission has exposed the institutional mistreatment of children, but I suspect many of us similarly have little knowledge of Bidura – a residential centre in Glebe for girls and young boys caught up in the state welfare system and awaiting long-term foster care placement – and the ongoing damage to individuals and families that resulted.

This is the “Bidura Effect” and why it’s such a powerful book for us to read. The driving motivation behind the book is to give voice to the “ghosts” of the children who were so badly let down by the people who are supposed to protect them. Children like Doreen – a former Bidura girl and child of the Stolen Generation – now a feisty 60-year-old grandmother confined by fear within the cocoon of her tiny, dirty apartment in the Redfern “Suicide” Towers.

As Twenty-one uncovers Doreen’s story, we begin to understand the devastating ways that Bidura, and places like it, continue to affect her and the lives of her children and grandchildren, now themselves entangled in state care.

Like every new graduate, Twenty-one has a lot to learn as the confidence of youth gives way under the emotional weight of these complex and entrenched family problems. Her questioning of how she can survive this “sea of human suffering, let alone rescue anyone else” lies at the core of what it means to be a professional caseworker. This willingness to reveal her uncertainties and confess her failings along the way engages the reader in the bigger questions of how we seek to honour God in our life and work.

For Twenty-one, survival is a process of reflecting on insights offered by experienced workers, friends, her pastor and the Scriptures, as well as learning to listen to others. As her pastor later reminds her, “Stories hold the key to both our identity and our purpose”.

So begins her quest to hear and acknowledge Doreen’s story, which weaves throughout the book like the butterfly totem that is the fragile link to her Aboriginal identity. Interspersed with Doreen’s story is an unremitting flow of achingly sad cases drawn from real-life experiences that come across Twenty-one’s desk.

A book of this nature – dealing with Stolen Generations, broken families, foster care and a welfare system where hope can be in short supply – could be very heavy going. But in fact the narrative moves well between tough cases and lighter moments where Twenty-one explores life and faith with DoCS colleagues, Ben and Lucy, and her church community.

In contrast to the past memory of Bidura, these “three musketeers” represent the type of genuinely caring, dedicated caseworkers comprising our modern child welfare system, together with a few who embody the attitudes of the wrong person for the job.

We meet some inspiring foster care heroes along the way. But the sad reality remains that some problems can’t be fixed and not every case will have a happy ending. This difficult truth prompts Twenty-one’s deeper observations about divine justice, mercy, forgiveness and love. And while Christmas is shown as a time to bring out the worst in humanity, it also offers Twenty-one a powerful time to reflect the love of God in sending his own Son to be our Saviour.

The book concludes with her leaving DoCS for a new role, which, given her progress and the trust placed in her by managers and clients, was mildly disappointing. Perhaps, too, the ending of her relationship with Doreen was a bit neater than real life cases often are. However, in sharing her journey of discovery, Twenty-one has opened our eyes to the past pain and suffering still among us, and shown that being true to Christ takes courage and willingness to listen, learn and grow, knowing we do not face the darkness alone.