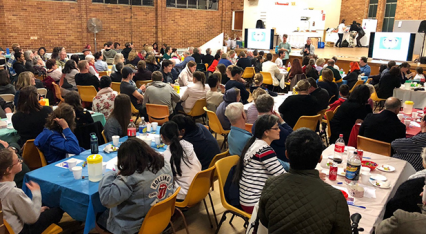 A group of churches keen to see the Special Religious Education (SRE) go forward in public high schools in eastern Sydney banded together for a trivia night at Holy Trinity, Kingsford.

The purpose of the event was to raise funds in support of Jono Campbell, a member of Wild Street Anglican Church, who was hired this year by the OurSRE East board to teach Scripture at Randwick Girls’ and Randwick Boys’ high schools one day a week.

Each group of eight had paid to make up a table for trivia, but answering questions wasn’t all they had to do. There was also a range of silent auction items to bid on to raise more funds for Mr Campbell, while from time to time there were extra points on offer, for which participants had to do everything from throw darts to squash balloons to dance the macarena.

In the end, well over $3000 was raised on the night, while another separate $2000 donation was also made to OurSRE East.

“It was fantastic – a great night,” said the evening’s MC, and assistant minister at Wild Street church, the Rev Josh Ackland.

“It was a sellout… we couldn’t have had more people, and we really weren’t expecting that. There was a lot of energy and enthusiasm for the cause and you really felt it on the night.

“People really wanted to hear from Jono and were really supportive in all sorts of different ways about the stories he shared and all the conversations he had with people around the tables. They were just really excited about what the Lord is doing in schools in the east.”

Mr Ackland said that, until recently, the local public high schools had no SRE presence. “I know that for 30 years there was no Scripture at Randwick Boys’… so people at the trivia night were really pumped about these opportunities,” he says.

“Jono was really energised by the whole night. It gave him great encouragement to see the number of people who are praying for what he’s now doing.”