Fires are causing non-believers to pray 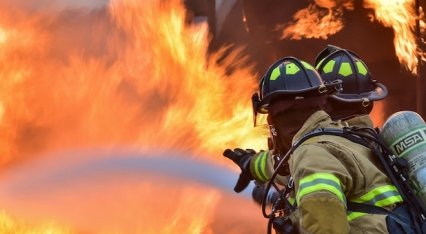 Australia has been devastated by bushfires. The country has been overwhelmed with fires which began in September but peaked over the new year period. So far, 12.35 million acres of land have burned across the country, with experts predicting the bushfire season may last as late as February. Hundreds have been evacuated from their homes and 480 million animals are estimated to have died due to the conditions. 23 people have been confirmed dead, including two RFS volunteers.

Amidst this intense destruction and suffering, #PrayForAustralia is trending on Twitter with 1.07 million tweets.

Of course, it makes sense to pray at a time like this - when we feel completely out of control, dwarfed by the ferocity of the flames. When we see people undergoing immense suffering, without knowing what we can do about it, it is natural to look to someone or something bigger than us or to plead for help.

If you are a person of faith, here are three things you can say to the non-religious people in your life to encourage them in this difficult time.

The God revealed in the Bible is shown to to love and care for his people. He promises again and again to listen to their prayers.

In Jeremiah, when God’s people have walked far away from Him and been exiled in response, God is clear that He will listen to the prayers of the one who seeks Him.

Jeremiah 29:12-13; "Then you will call on me and come and pray to me, and I will listen to you. You will seek me and find me when you seek me with all your heart."

"Seek me with all your heart"

When we look into the massive fires across Australia, it is immediately clear that we are tiny in comparison. But God, who hears our prayers, is powerful in a way we can’t even imagine.

“But God made the earth by his power, and he preserves it by his wisdom. With his own understanding, he stretched out the heavens. When he speaks in the thunder, the heavens roar with rain. He causes the clouds to rise over the earth. He sends the lightning with the rain and releases the wind from his storehouses.” Jeremiah 10:12-13

God is able to bring rain, and quench fire. He is able to save - he is not powerless.

"God sends the lightning with the rain"

The big picture of the Bible shows us that creation is groaning under the weight of being separated from God. Our broken relationship with creator has caused a world filled with suffering, death and danger.

But God promises to renew and restore our relationship with Him, and the brokeness of the world. We recently celebrated Christmas, where Jesus comes into the world to bring relationship with Him, and to restore our broken world. When we look at the last book in the Bible, we see a promise of what that will be like:
“Then I saw a new heaven and a new earth, for the first heaven and the first earth had passed away...And I heard a loud voice from the throne saying, “Behold, the dwelling place of God is with man He will dwell with them and they will be his people, and God himself will be with them as their God. He will wipe every tear from their eyes, and death shall be no more, neither shall there be mourning, nor crying, not pain anymore, for the former things have passed away” Revelation 3:1, 2-4.

In the face of suffering, loss of life and devastation of property and livelihood, we pray for relief. For rain to come and the fires to stop. But we can also look forward to the day when God comes to dwell with us and removes the pain and suffering from our world.

Read our prayer for Australia here.