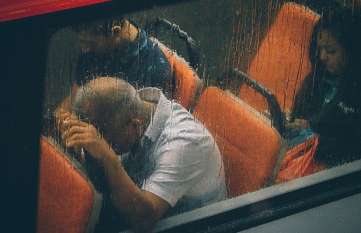 Recently I have been in a season of grief.

A few months ago, my uncle died of cancer. He was my fittest uncle and yet the cancer made him so weak he could not walk. All of this happened between visits home – I left and my uncle was healthy, I returned for his funeral. I watched in that season as my family sought to cope with the loss of a “young” man. Some clung to gospel truth. Others sought “spiritual” help through mediums. Still others sought peace through an understanding of universal cosmic energy, to which, they thought, my uncle had returned.

More recently I watched my father-in-law die after a long bout with degenerative illnesses. I have seen in that season the real wrestle of a mature Christian man to stand firm in his convictions as the end approached. With him, I have seen his family (my family) – even me – process this loss with all sorts of questions. As he died – a man who had ministered for nearly 30 years in a church – how would we make sense of that loss? How should we feel?

Still more recently, I arrived at church on a Sunday morning to hear that one of the teenagers in our congregation – a member of a very keen Christian family – had died the night before. I watched as the congregations across that Sunday tried to deal with this tragedy. Waves of emotion swept over us as we sang “A Mighty Fortress Is Our God” and “It Is Well”.

We were forced to ask, “Is God truly our mighty fortress?” and “Is it really well with our souls?” That Sunday was one of the most remarkable occasions at church in my memory. I have never experienced such solidarity with God’s people as we grieved sincerely and corporately, and as we clung collectively to the promises extended to us in Christ.

Grief is a humanising experience. While we don’t all grieve in the same way, or for the same reasons, we all grieve. We do so because we all lose. In our grief, our mortality is exposed. We are human.

Grief is a fault line. It opens us up. It exposes us. But it doesn’t just do this emotionally; it does so theologically. If you want to know a person’s true theology, speak to them when they are grieving. There you will discover what they hope in; how they cope; what makes sense of their world.

As a listener to those grieving, I became acutely aware that grief is never something we feel prepared for, but a season in which we must be prepared. That is to say that our convictions matter in that time. Without clarity about what we believe about life and death, in grief we will fill in the gaps with all sorts of non-sense. We need an anchor in the storm. So, it is here that I would like to propose a few reflections either in preparation for grief or in consolation for those grieving.

Too often we, in denial of the pain of death, act as though it doesn’t affect us. I have seen this response in different dress: sometimes it is the outright refusal to face up to the reality that death brings real loss. Other times it is the very “pious” response that everything is better now.

Behind both of these, of course, there may be good intentions and perhaps some good convictions. But they don’t actually give appreciation to the real tragedy that death brings. Death is not what should be (I am not denying God’s sovereignty). Death is the consequence of sin. It comes because of the curse brought by human sinfulness. What happens at death, then, is not “natural” even if it has become normal. That is, it is not what we are meant for – life with God. So, we must recognise that death is a part of the problem with the world. And it hurts.

Why does Jesus weep? I suspect there are two reasons. First, he shows solidarity with the community in grief and expresses his sincere love for a friend lost. He really was gone and it really was painful. Second, Jesus shows us that death is not what is good. It is a painful problem. Of course, the brilliance of this passage is Jesus’ demonstration that he is indeed “the resurrection and the life”, and whoever believes in him “though he die, he shall live” (John 11:25 ESV).

2. We are meant for a body – don’t misunderstand life after death

When people are uncertain about what happens when someone dies, they tend to make things up according to what sounds best (usually from pop culture): “My baby is an angel now”; “He has gone to become a part of the life force”.

Again, these are all well-intentioned ideas but they don’t accurately represent what the Bible tells us about life after death. We may, in fact, become like the angels – in that we won’t be married – but we won’t become angels. We never will return to a life force, because we have not come from a cosmic energy, nor do we return to such. God is personal – he is not a “force”. And we aren’t a part of God’s being, as if we are an extension of his “energy”.

Here we see demonstration once more that death is not “natural”, for at death something very unnatural happens. Our soul is divorced from our bodies. This means that spiritually we are with the Lord when we die – we continue to exist really and consciously. But this is not what we are meant to be like. In fact, it isn’t what we will always be like. For those who die trusting in Christ, they continue and are with him until the day that Christ comes again and raises the dead (1 Thess. 4:13-18). Then, those believers who have died will take on flesh once more; they will have new, restored, glorious, immortal bodies (1 Cor. 15:35-58).

3. Death is not an escape – don’t give death too much

When life gets hard, there is a temptation to think that death is the end or an escape. We feel prone to think this way when we watch people in pain; when circumstances are extremely difficult; when relationship breakdowns seem irreconcilable. Death, in these moments, can have a strange allure: release from the pressures or pains of the present. But death is no escape.

Sure, Paul does desire to “depart to be with Christ” (Phil. 1:19-23), but this is not because death is good. And though Paul said this – for his desire for Christ was great! – he continued to entrust himself to Christ for the work of ministry (Phil. 1:24-26).

I cannot say it any better than Michael Horton in his book The Christian Faith: A Systematic Theology for Pilgrims on the Way:

Death is an enemy, not a friend (1 Cor. 15:26), and a terror (Heb 2:15) so horrible that even the one who would triumph over it was overcome with grief, fear and anger at the tomb of his friend Lazarus (John 11:33-36). Jesus did not see death as a benign deliverer, the sunset that is as beautiful as the sunrise, or as a portal to “a better life”…

The reason that believers do not mourn as those who have no hope (1 Th 4:13) is not that they know that death is good, but that they know that God’s love and life are more powerful than the jaws of death… Downplaying the seriousness of the foe only trivialises the debt that was paid and the conquest that was achieved at the cross and the empty tomb.

This, of course, is not to snatch any comfort in the death from the one who suffered much. There is relief with Christ (Rev. 21:1-7). But the goodness of being in and with Christ does not take away from the fact that death is an aberration.

4. Death is not the end – there is real hope beyond the grave

Our God is a God of salvation, and to God, the Lord, belong deliverances from death (Psalm 68:20).

Death can feel final. We feel as though we are losing someone forever. But this is not the truth when we consider what the Bible tells us. We have already seen that Jesus declares, “I am the resurrection and the life. Whoever believes in me, though he die, yet shall he live, and everyone who lives and believes in me shall never die. Do you believe this?” (John 11:25-26).

In many ways, the question that Jesus asked Mary then is the same question he continues to ask us today.

In the face of grief, we may find ourselves doubting that Jesus is indeed the resurrection and the life. We may find it hard to believe. But this, again, is where we must cling to our anchor: we remember the promises of the Scriptures. We do not waver from them. We depend upon others to encourage us from texts that keep this message of hope before us.

We recall Hebrews 2:14-15, which declares that Christ came for men and women (not angels) so that “through death he might destroy the one who has the power of death, that is, the devil, and deliver all those who through fear of death were subject to lifelong slavery”.

With this promise, we remember the great reassurance of Romans 8:38-39 that tells us that “neither death nor life, nor angels nor rulers, nor things present nor things to come, nor powers, nor height nor depth, nor anything else in all creation, will be able to separate us from the love of God in Christ Jesus our Lord”.

Finally (and once more), we remember the encouraging words of 1 Thessalonians 4:13-18, that tell us we should grieve as those with hope: “since we believe that Jesus died and rose again, even so, through Jesus, God will bring with him those who have fallen asleep”.

Christ will come again, and when he does the dead will be raised. It is sure.

Dr Chase Kuhn is director of distance education and lectures in Christian thought and ministry at Moore College.