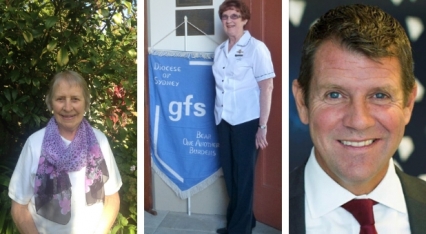 A group of Sydney Anglicans have been recognised in the Queen’s birthday honours list –among them Emeritus Professor Kim Oates, who was made an Officer of the Order of Australia (AO) for “distinguished service to paediatric medicine, as an advocate for child health and welfare, to medical education and to professional societies”.

Professor Oates is a tireless advocate for the welfare of children and has previously been recognised with an AM and a Centenary Medal for his work.

He has been involved in numerous national and international organisations to prevent child abuse and care for survivors, including 24 years on the executive council of the International Society for the Prevention of Child Abuse and Neglect, and three years as president. He was also chief executive of The Children’s Hospital at Westmead from 1997-2006 and has been involved in a professional capacity with universities and organisations across the globe, receiving honorary titles and awards in Australia, Vietnam and China.

Since 2008, Professor Oates has been part of the academic board of Excelsia College, and became a member of the Sydney Diocese’s Professional Standards Committee in 2009.

“[I’m] incredibly thankful for the opportunity to serve my community and the people of NSW.”

Also receiving an AO in the honours list was former NSW Premier and Member for Manly, Mike Baird, who could not hide his shock – saying in a statement that he felt there were “many more deserving people who won’t be recognised”. However, he added that he was “incredibly thankful for the opportunity to serve my community and the people of NSW for 10 years”.

The 44th Premier of NSW has been involved in a number of community initiatives, including the Salvation Army’s Oasis youth network, children’s hospice Bear Cottage and Project Uplift – an organisation he founded in 2014 to help make a difference in the lives of teenagers from difficult backgrounds.

A member of St Matt’s, Manly for many years, Mr Baird has recently been appointed as CEO of HammondCare and takes up the role in August.

Another former politician honoured this year, Philip Ruddock, is described by Archbishop Davies as “a good friend to the Diocese [who has] provided me with useful counsel”.

Mr Ruddock, who was a member of Federal Parliament for 39 years, Attorney General from 2003-2007 and has been Mayor of Hornsby Shire Council since 2017, received his AO for distinguished service to the people and Parliament of Australia, and to local government.

He also chaired the Protection of Religious Freedoms Review in 2017 and 2018, and is on the advisory board for Global Action Panel Australasia. A former member of the parish of Asquith, Mr Ruddock now attends St James’, King Street.

When Patsy Cooper received a letter informing her that she was being considered for a Queen’s birthday honour, she admits with a laugh that she “read the first sentence and then dissolved into tears… there I was, sitting at the kitchen table with the letter in front of me and I was quite overcome. It was a combination of the enormous honour and privilege that it is, and also the lovely thought that someone bothered to nominate me!”

Ms Cooper, who worked as a teacher (then deputy principal) for 36 years, received an Order of Australia Medal (OAM) for service to the community. She has been a member of St Stephen’s, Willoughby since 1963, when her family moved to the North Shore. She immediately joined the Sunday school staff, and was a teacher and leader until 2003, when a cancer diagnosis meant “most things had to get put on hold” until she recovered. She also ran primary-age Camp Howard camps in the 1970s and ’80s.

In addition, Ms Cooper has been one of a team of four that organises the management of the 8am communion service – which she has attended since arriving in the parish – following up those who attend and keeping in touch with anyone who is ill. She has also helped run the church tennis club for 55 years and is part of a committee that organises and runs the parish seniors’ group.

Since her retirement in 1997, Ms Cooper has also undertaken numerous voluntary roles: tour guide at NSW Government House and tour guide and project supervisor to The Children’s Hospital at Westmead, among others.

“I’ve loved every single thing I’ve done as a volunteer,” she says. “It’s been absolutely wonderful… but it’s also very, very nice to know that I have been recognised for that effort.”

An OAM has also been awarded, posthumously, to Mrs Lyn Vaak for service to the community, particularly to women and young girls. She did this through the Girls’ Friendly Society, now known as GFS, with which she was involved from 1960 until shortly before her death last year.

Mrs Vaak, who was a member of the church at Emu Plains for many decades, began a GFS group there in 1978 and led it for 32 years.

A board member of GFS Sydney, Deirdre Noss, says of Mrs Vaak that “Every week she would organise programs, games, camps… she did so much to mentor girls in the Emu Plains area. She also took on roles in the wider organisation of the Blue Mountains and in GFS Sydney and then, in later years, she took on roles within GFS Australia as well.

“GFS was her life. She wanted to share her love of Christ with everyone she could, and felt she could do it the best in the GFS. She inspired a lot of women to become leaders and to also express their faith, as well as sharing and encouraging girls to turn to Christ. That’s what we all really remember her for: as a model and mentor to so many women and girls throughout her life.”