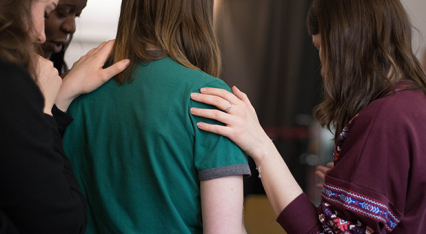 The departed family member may not have been Christian, but that’s no reason why the message of the gospel should not be proclaimed just as clearly as if the person had died in Christ.

A worldview that makes sense

“I still recall David Peterson’s lectures at college along the lines of ‘Weddings and funerals are a good chance to make a little bit of ground with a lot of people’,” says the Rev Canon Sandy Grant from St Michael’s Cathedral in Wollongong.

“[At a funeral] I want to say something sensible about the gospel so that if a non-churchgoing person heard it they might think, ‘That made a lot more sense than I expected, and if I was go to church in the future, this would be the kind of place I would try out’.”

Rector of St Jude’s, Randwick, the Rev Andrew Schmidt adds that by simply following the structure in the Prayer Book service, everyone is presented with the gospel at an Anglican funeral.

“If you think about the purpose of the funeral service in the prayer book, [it says] we’re there to give honour to the person who’s died, to show sympathy with the bereaved and, in prayers of faith and hope, to place our trust in God surrounding the person’s death,” says Schmidt.

“They’ve come to church for a funeral because of tradition, or because it’s what the person who died would want,” he says. “I often worry in the middle of my sermon that it is a bit too uncompromising, yet no one ever seems to be offended. I’ve found people are very appreciative and can think of at least two people who’ve become regular attenders at church following funerals I’ve taken.”

Simon Manchester adds that it’s crucial not to give false hope about the person who has died. If he were taking the funeral of a non-Christian man, he says he would talk about how that man had had his opportunities “and God willing he took them, but we don’t know”. He would then speak to those present about the road they were on before they, too met with Christ.

“I don’t think we can play a game that all is well with the person who died,” he says.  “Otherwise someone sitting in the pews might think, ‘I know that person had nothing to do with God at all and if this [minister] says they’re alright, then so am I’.

“It’s too big an issue to give false hope. Really, you’ve become a false prophet saying ‘Peace, peace’ where there is no peace.”