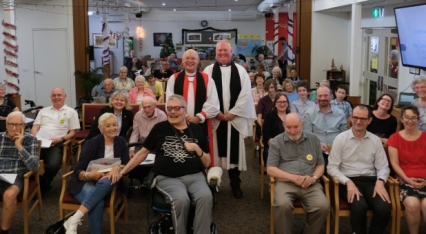 We are used to seeing groups of teenagers lined up for confirmation by the local bishop but there was a twist recently at St Michael’s Chapel at Anglicare’s Farrer Brown Court in Castle Hill.

The Bishop of North Sydney, Chris Edwards, was there to confirm two residents, one of whom has just come to faith. Eighty-two year old Ray Turner and 75-year-old Chris Lawes gave their testimonies before residents, family members, Anglicare staff and volunteers, as well as a delighted Anglicare chaplain, the Rev Marty Symons.

"I've become one of you guys"

Mr Turner came to Farrer Brown Court with a lot of questions about Christianity. After completing the Christianity Explored course, he approached the chaplain and declared, “I’ve become one of you guys”.

According to Mr Symons, “Since Ray became a Christian, a transformation has come over him. He comes to devotions every morning, to chapel services and to Bible study. He is consuming the Bible a lot and it’s a privilege to get to know him.”

Mr Lawes was already a Christian and a long-time resident of Farrer Brown Court but, from his wheelchair, gave a strong testimony.

“I attend the services here, and Bible study in the guidance of Marty Symons, and he has made my belief in Christ, along with what the Lord wants for me, very clear to me,” Mr Lawes said. “I am delighted to be here in front of you all to pledge myself to the Lord.”

According to Bishop Edwards, “Both Ray and Chris have had people talk to them about Jesus throughout their lives. They held the 'pieces' but it was while Marty sat with them and they opened the Bible together that all the pieces came together.”

Mr Symons said he’s seen a big change. “Chris comes to church and Bible study, and I’ve seen huge growth in him. I’m looking forward to seeing what God is going to do with Chris for the rest of his life.”

"It's never too late"

It just goes to show, the chaplain says, “It’s never too late to ask Jesus into your life. No matter what you think you’ve done or the guilt you carry, there is nothing that Jesus’ blood cannot wash clean”.