Is the clipboard making a comeback? 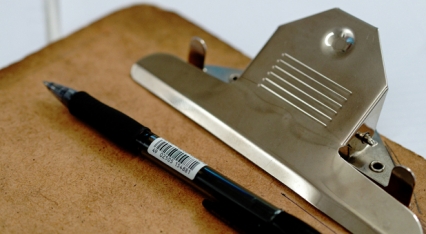 Several times this year, while visiting churches, I have been struck by the way the clipboard seems to be making a comeback as the most reliable means of communication with parishioners.

This was not a one-off observation. It has happened on half a dozen occasions and counting.

Nor were these tech-shy churches, but as tech-savvy as any you would like to imagine. Here are two examples.

St Broadband tried to hold a dinner and asked those who wanted to come to book-in online. But the event had to be postponed with only 16 takers. The dinner was rescheduled and out came the clipboard. People signed up before and after Sunday church and the event went ahead with something north of a hundred and twenty in attendance.

This church is wall-to-wall data projection, powerpoint and plasma, from porch to podium. But it was the trusty and rusty old clipboard, with a warm person-to-person invitation from the church staff that pushed a commitment-shy membership across the line. It was a great night.

St Megapixel’s story is somewhat different. The rector announced, with a hint of exasperation in his voice, that he was passing around a clipboard during the announcements at the church service, because nobody was responding to his requests on email. He even expressed his fear that his emails were being trashed without being opened.

Around came the decades old, no, the generations old, corner cracked, spring loaded, finger biting, thumb bruising, brown chipboard clipboard, complete with surface rust and an HB pencil attached to the metal clip by a bit of tired looking string. It was straight from the archives, or the museum. I wondered whether it needed a termite inspection certificate.

Of course, in some places, the clipboard has never been superseded. And in some of the most important places of all. I visited a friend in hospital recently and there it was, at the foot of the patient’s bed, where it has always been, for a century, if not more.

The humble clipboard, on which is recorded all the vital statistics, as the patient’s health hangs by a string. There may have been tablets in a little plastic tub on the patient’s bedside table, but no tablets at the foot of the bed. There may be electrical monitors beeping away above the patient’s head, but the clipboard continues to be the technology of choice when the doctor does his rounds and wants reliable information at his fingertips.

Another place is the stadium. We may have bunker refs with banks of plasma, electronic scoreboards with instant replays from every angle, and state of the art communication technology between the on-field and the off-field arbiters. But I still notice, in Australian Football at least, that the preferred mode of communication at quarter and three-quarter time is the portable whiteboard and marker pen.

I’m sure a few pain-killing tablets are consumed away from the camera’s view but it’s all marker pen technology as the coach barks at his boys pointing to the crudely drawn diagrams, with arrows pointing this way and that, on the hand-held whiteboard, showing where their defense is leaking and their attack is blunted.

Are there any lessons to be learnt in all of this? Not too many, I’m sure. But here is an important one that comes to mind.

There is an immediacy in the clipboard that evokes action, rather than acquiescence, decision rather than delay.

There is something more personal in the clipboard when it is accompanied by a warm invitation from the front or in a one-on-one encounter at the door or over refreshments. While electronic communication invites indecision, and with the avalanche of invitations that come that way, indifference and disconnection, the clipboard has a retro and personal winsomeness about it.

Of course, the comeback of the clipboard will never be the panacea for apathy, and connecting the world by various forms of electronic media, both in current and yet-to-be imagined forms, will always be with us.

But its return, if that is what in fact is happening with the clipboard, does say something about the shortcomings of social media, as well as the irreplaceable benefits of personal connections which are being lost with a rapidity that is frightening.

The ugly, awkward, ungainly clipboard, technology of a bygone era, may have a little, or a lot of life in it yet.

Imagine, a world with a clipboard!