Lausanne: the Gospel, the World and the Church

The Congress has been planned around issues concerning the Gospel, the World and the Church. Two focal points are developed within each of these areas: The Gospel - Truth and Reconciliation; the World - World Faiths and Priorities; the Church - Integrity and Partnership.  The second morning session is devoted to one of these six topics with various presenters, who are each only allowed to speak for 15 minutes. 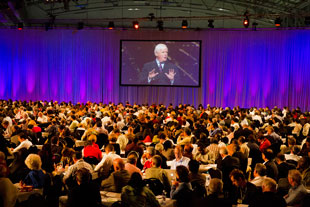 Monday's topic was Truth. The Bible study on Ephesians 1 was led by Ajith Fernando who exhorted us never to lose the wonder of God's grace. His talk was complemented by discussion in table groups. The truths of the gospel of grace were a fitting springboard for the second morning session with its accent on making a case for the truth of Christ in a pluralistic globalised world.

Although all four speakers gave some helpful insights, the standout address came from veteran social analyst and international speaker, Os Guinness (pictured). Os had also addressed a session at GAFCON in 2008 and he was no less impressive here, as he eloquently and concisely identified the threats to proclaiming the truth of Jesus Christ. 'Only a high view of truth honours the God of truth', he said, 'and one word of truth outweighs the whole world and the prince of this world.' In the words of Martin Luther, 'one little word will fell him.' Dr Guinness concluded, 'If we are not prepared to contend for the truth then this congress should stop now.'

Os Guinness' talk received sustained applause (in fact some enthusiasts, from a country I prefer not to name, kept interrupting with applause, thinking he had finished, when in fact his talk was making steady progress to a resounding crescendo of recognising Jesus to be the way, the truth and the life).

Following lunch there were four seminar sessions, called multiplexes, addressing diverse themes from 'a fresh approach to witness in the 21st century' to 'Dogma and Diversity - addressing secularity in a pluralistic world'. The second afternoon session was given over to Regional Gatherings when Australia and New Zealand participants met and workshopped some ideas about the gaps in Christian ministry and the challenges we face in our respective countries. The real challenge, of course, is how we shall address these matters in a meaningful way, and that is the hope that some practical ideas will develop through the week before the second Regional Gathering on the final day of the Congress.

The evening plenary sessions are given over to snapshots of God's work in the world. Tonight's geographical focus was Asia. A multi-ethnic and multi-talented singing group led us through the chorus "King of kings and Lord of lords" in English, French, German, Spanish, Japanese and Zulu. This was a great reminder of the multilingual nature of the congress, which while the platform speakers spoke in English, simultaneous translations were available for those who needed it. Likewise some table groups were language specific.

The evening session was highly professional with videos and drama interspersed throughout the 2 hour presentation, however the highlight was the testimony of a petite 18-year-old North Korean young lady.

She was born in North Korea and her father was a high ranking government official. Some crisis in the government required the family to flee to China and in China the father was converted. Soon after he was betrayed into the hands of North Korean authorities and returned to North Korea to be interned for four years. Meanwhile the daughter was adopted into the family of a Chinese pastor and she became a Christian too. She returned to North Korea after seeing a vision of Jesus in a dream calling her home. Her father was released, but soon after was again arrested for political/religious reasons. This was four years ago and the daughter is yet to hear from her father and presumes he is dead. This moving testimony brought sustained applause with thanks to God for his marvellous grace to this North Korean family. Her heart is burdened for North Korea and she asked us to pray for this communist country which lacks a visible Christian witness.

The evening finished with a tribute to Billy Graham with a video montage of his 70 years of ministry. A fitting reminder of our debt to our leaders (Heb 13:7) and our thanks to God for one who has served God so faithfully throughout his life. Probably no one has preached the gospel to as many people in their life time nor seen the gospel fruit of God's blessing upon his preaching ministry - to God be the glory!