Lifecyles of the average church

Though only made popular in the last decade or so in Sydney circles, the first research in the area of Church Lifecycles was published in 1962. Since this time much helpful research has been done in order to help churches understand their own dynamics so that changes can be made and more people reached for the Lord Jesus.

Now, this is not a theologically based tool. It is pragmatic, and the concept is used extensively by corporate strategists and others. With such tools being developed by observing the world’s inherent created order (whether or not this is acknowledged), the same tool can and has been used in a framework that seeks to build God’s Kingdom.

I have taken the diagram shown here and concepts from Dr Paul Borden’s book ‘Direct Hit’. He in turn has developed it from George Bullard. The interesting thing about this particular analysis is the mapping of how Vision, Relationships, Ministry and Structure tend to change as a church moves through a lifecycle. 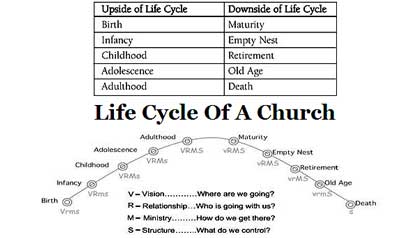 No church will fit the model perfectly. The important thing is the broad trends. The capital letter on the diagram represents a strength that tends to be associated with that particular stage, and the smaller case letter means that the category has faded or never become particularly established.

The Vision category includes a clarity surrounding mission, vision and values. It tends to be strong when in the upsides of the lifecycle. Congregations on a downward lifecycle do not change their lifecycle until they become focussed outward.

The Relationships category refers a congregation’s ability for people to develop relationships with others. Linked to the biblical concept of community, people often look for a church where they can make friends, be accepted and valued, and this is aided by an appropriate mix of different sized groups. Generally it is hard to break in to a small group, and equally as hard to feel part of a large group. Hence larger congregations must develop sub groups for people to belong.

The Ministry category forces one to critically reflect on whether or not ministries are contributing to the goal of disciple making disciples at both an individual and congregational level. Ministries require constant evaluation lest they accelerate reaching the downward side of the lifecycle.

And finally, there are the Structures of developing leaders. This must always be done, and as a church grows it must become more intentional and organised.

Much more has been researched and said. Within a biblical framework and vision, and with much prayer, and under God, you can develop a new lifecycle. For example, if your church is plateaued or in decline, has your church lost your vision to see the local community won for the Lord Jesus?