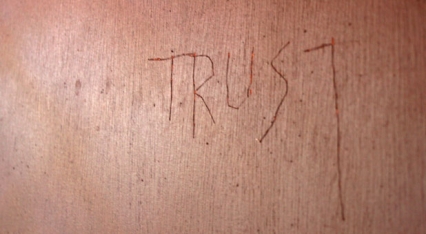 Recently one of my basketball friends and I were having a conversation prior to the game. He asked me what I’d been doing that day. When I told him that I’d been marking essays, the next bit of our conversation went something like this:

“Are you a teacher, then?”
“Yes, I’m a lecturer at Moore Theological College.”
“What’s sort of place is that?”
“It’s like a university for people training to be Christian ministers or missionaries.”
“Oh, so you’re religious, then?”
“Well, I’m a Christian, yes.”
“So you must take it very seriously.”
“Yes, I do indeed…”

As you can see from that snippet, like most evangelicals I am somewhat guarded about using the label, “religious”. It’s something we often associate in our minds with mechanical ritual, nominalism, idolatrous practices, or any belief system that espouses salvation by works. Hence we are rightly reluctant to apply such language to our personal faith in Jesus and our devotion to the triune God revealed in Scripture.

However, in doing so, could we be throwing out the baby with the bathwater? After all, while admittedly uncommon, the New Testament occasionally uses such terminology in relation to Christian practice. Most famously, James ends his first chapter with a contrast between worthless and acceptable religion: “Those who consider themselves religious and yet do not keep a tight rein on their tongues deceive themselves, and their religion is worthless.

Religion that God our Father accepts as pure and faultless is this: to look after orphans and widows in their distress and to keep oneself from being polluted by the world” (James 1:26-27 NIV).

In a similar vein, Paul speaks of Christians “putting their religion into practice” (i.e. demonstrating their piety; cf. Acts 17:22) by caring for older family members (1 Tim. 5:4 NIV). Significantly, in both these cases where religion is clearly being commended, what is in view is Christian behaviour or practice. Moreover, both texts have a shared focus on our Christian responsibility for others – in particular, the more vulnerable members of our society.

So, with apologies to R.E.M. (whose song “Losing my religion” about frustration and loss of civility stemming from unrequited love was a huge hit in 1991) I want us to consider the question: are we in danger, today, of losing our religion?

While it’s clear from James that there’s much more to “acceptable religion” than just caring for vulnerable members of our society, it’s on this that I want us to focus especially. Today we are rightly concerned about child abuse, domestic violence and those who mistreat or take advantage of the elderly. However, there are aspects of such abuse and maltreatment to which our society is unfortunately much more tolerant, and even the Christian voice often seems rather muted.

Just recently, I came across the picture of an unborn child in the womb, which was being used to highlight the fact that the safest place for children should be their home. The irony of this is somehow lost for many in modern Australia. In a similar vein, our contemporary society rightly vilifies those who exploit or harm the elderly, yet at the same time, many are pushing for a change in legislation that could end up taking away the right of the elderly to live – or at least jeopardising their say in such matters.

As Christians, it is important that we stand against the tide of 21st-century utilitarianism, and do all in our power to protect and care for the vulnerable and defenceless, however inconvenient this (or they) might be.

As these passages underline, caring for the vulnerable is something God is deeply concerned about. As such, it is something that should obviously concern his people also. But it’s also an ethical obligation. Looking out for the vulnerable was clearly a responsibility of God’s people in the Old Testament. But as James has already reminded us, it’s also a New Testament responsibility for the people of God. Insofar as James is concerned, this is one of the hallmarks of the “religion that God our Father accepts as pure and faultless”.

Genuine Christian piety should thus express itself in caring for weak and vulnerable members of our society. And while, as Paul reminds us, such care will begin with the members of our immediate family (1 Tim 5:3:8), it will not end there (1 Tim 5:9-16). Moreover, as he reminds us elsewhere (Gal 6:10), our Christian duty of care also extends beyond our church family.

So, I suppose the question is simply this: How are we going with our Christian duty of care for those in our biological family, our church family and our wider society? Have we relinquished all our family responsibilities to the state, or are we genuinely caring for the vulnerable members of our families insofar as this is possible?

What about those in our churches? In some cases, it may be more a matter of time than money but what, if anything, are we doing to assist them in whatever way we can? And perhaps most importantly today, what practical steps are we taking to care for the weak and vulnerable in our society?

On issues such as abortion and euthanasia, it is clearly important for us to speak out and make our objections heard. In a society that is so strongly pro-choice, unfortunately, the womb is far from the safest place to be. Indeed, in some parts of Australia, there are already moves to extend abortion legislation still further and mute the voice of all those who would dare to speak against it. Unfortunately, the Christian voice seems largely silent on this issue in recent times – possibly due to a perception that this battle has already been fought and lost.
Interestingly, however, many former advocates and even some of the doctors who performed such procedures are now firmly pro-life. This is hardly surprising given the techniques involved and the post-abortion trauma so often suffered. Surely the ongoing massacre of unborn children in the womb is something that God’s people should be deeply concerned about?

Of course, as well as praying and protesting about such matters, we must do whatever we can to support and show love to those with unwanted pregnancies. But saying or doing nothing is surely not an acceptable option for the people of God.

The same applies in the case of euthanasia, arguably the next great ethical debate voters will face in a world where the legalisation of this practice is increasingly advocated. Under the guise of “dying with dignity”, assisted suicide or voluntary termination of life is promoted as a positive alternative to a much less desirable life or a death involving prolonged suffering or anguish.

Aside from the fact that suicide or murder is a sinful act, and that death may usher people into a much worse experience, the practice is open to significant abuse. Where currently legal, the decision to terminate can be taken out of the hands of the patient altogether and sometimes even carried out against their expressed will. It is thus incumbent on Christians to speak out against and resist the moves to legalise such immoral practices.

But, as in the case of abortion, we must also take whatever practical steps we can to help those who are terminally ill or are facing prolonged mental or physical suffering. Simply handing over our responsibilities to the state, or just opposing unethical legislation, or selfishly ignoring such people in a hospice or nursing home, is arguably an indicator of unacceptable religion.

As acknowledged above, the religion that God accepts as pure and blameless involves much more than carrying out our responsibility for the vulnerable members of society. But it clearly does not involve any less than that. And so, I think there is every reason for us to reflect carefully on the question: As Christians in living in the 21st century, are you and I in danger of losing our religion?