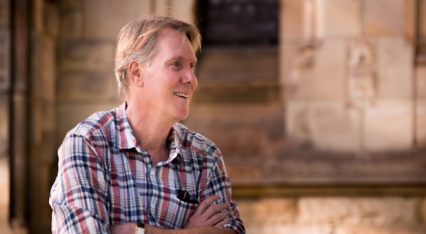 The rector of North Sydney, the Rev Simon Manchester, has been given a rare honour as he prepares to step down from his parish ministry at the end of this year.

Archbishop Glenn Davies has announced that Mr Manchester will join a select list of leaders who have been made honorary clerical Canons of St Andrew’s Cathedral.

The list includes theologian Dr James Packer and Mr Manchester’s brother-in-law David Short, made Canons by then Archbishop Peter Jensen after the Anglican crisis in Canada in 2008.

Sydney has been blessed by the ministry of Simon Manchester

Dr Davies announced the appointment last month, with immediate effect. Canon Manchester served curacies in Wollongong and at St Helen’s, Bishopsgate in London before returning to Sydney and becoming rector of Lalor Park and Kings Langley. He has also had a lengthy involvement with the Cornhill Sydney preaching course.

“Sydney has been blessed by the ministry of Simon Manchester over many years,” Dr Davies says. “Simon completes, this year, a tenure of 30 years as rector of St Thomas' Church, North Sydney. During that time his influence has not been restricted to North Sydney as he has been a regular teacher of the Bible on radio and exercised a significant international ministry.

Simon has had a significant international ministry

“It is a great privilege for me to appoint him an honorary Canon of St Andrew's Cathedral as a reflection of the warmth and esteem in which he is held and for his outstanding contribution to the Diocese of Sydney and to the kingdom of God.”

Canon Manchester says he is touched by the honour. “This kind gesture from the Archbishop reflects the Lord's own goodness and mercy since he sees our faulty efforts and continues to be patient and gracious,” he says.

“The 30 years have been a huge privilege and as I finish at North Sydney I will see this Canon message as ‘You're loved’ and not ‘You're fired!’”