“I couldn’t have done it alone”: Ten years of infertility, seven miscarriages, three rounds of IVF 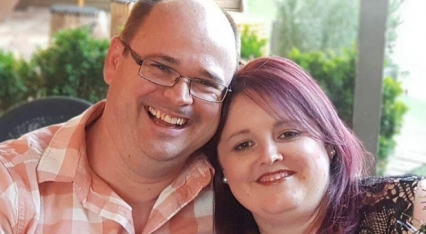 My name is Heather, and my husband, Michael, and I have been married for 21 years. In that time we have experienced eight years of infertility, seven miscarriages, three rounds of IVF and have no children.

In my late twenties, I was diagnosed with polycystic ovary syndrome (PCOS) at a high level and told I would never have kids. Having kids was something I thought I would always do. I figured I would meet a guy, get married and have a family.

I first fell pregnant about eight years ago on a cruise. It came completely out of the blue. We lost that one fairly early, and it’s still awful. My last miscarriage was 12 months ago.

I was in my thirties when we went down the IVF path. We had our embryos tested and we discovered our genes didn’t line up. Every embryo tested had a different genetic disability. An IVF doctor told us that if it had been the same disability we could have had a definite “Yes” or “No”. Different results left us asking, “What if the next one works?”

“I emotionally couldn’t do any more miscarriages…”

We got to the point where we couldn’t do it anymore. We started the adoption process. But then I fell pregnant, and so we pulled out of adoption.

Our sixth miscarriage was about four years ago. That was a really hard one because my husband was overseas for four weeks. We almost got to the end of the first trimester. It was a little boy. I emotionally couldn’t do any more miscarriages.

When I fell pregnant last year, I felt angry rather than excited. I knew what the outcome would be. I told my manager, “Sometime in the next six to 12 weeks I’m going to need time off because I’m going to have a miscarriage”. It became clear very quickly that it wouldn’t work. It’s hard, because you know what you’re about to go through. We called the baby Hope, because we had a glimmer of hope there.

“I sometimes get to the point where I don’t know what to pray, but Jesus knows.”

A lot of couples don’t make it through IVF. There have been times where it has brought Michael and I closer together, and at times it has brought us frustration. Michael has been really good at encouraging me to listen to sermons and go to church. He’s been there and held my hand through everything.

I pulled away from church a lot. My church, Glenmore Park Anglican, is amazing and great. But you hear sermons about rejoicing and always giving thanks and I found I got angry with the sermons. I remember messaging my pastor after one sermon, and he replied, “When we can’t see God’s hands, we need to learn to trust his heart”. This has always stayed with me.

I’d gone from being okay with not having children, to falling pregnant and realising I would really like to do this. I was struggling to figure out who I was post-miscarriage and post-IVF. I was really lost. I felt like I was drowning. I’ve dreamed of drowning. At any point when I feel frustrated I think, “God has the plan, he has the road map. I need to trust him”.

All my babies are in heaven; they’re at peace. They don’t have to go through what we are going through on earth. One day I will get to heaven, and I will meet my kids and I’ve got them forever. We’ve been so focused on this, that the challenge is to remember that’s not the goal of getting to heaven. I’ve still got a long way to go, and I’m still struggling. I’ve spoken to women in their eighties and nineties who have said miscarriage is not something you get over, but it’s something you learn to live with.

I sometimes get to the point where I don’t know what to pray, but Jesus knows. The Lord will fight with you, you only need to be still. I can be frustrated, but I can sit still.

I can see how God has done little things, and put me in the right places for each miscarriage. We had to go to the hospital at 6am with my second miscarriage, as I needed a dilation and curettage (commonly called a DNC). Another woman from my church was also in the waiting room, waiting for surgery. When I woke up in recovery, she was lying in the bed next to me. She came to visit me at home the next day. She brought me a meal and sat with me. She didn’t try and say anything. She just gave me a hug. She always sent me messages at the right time. You don’t always see God’s work at the time, but looking back you see it.

The best thing you can say to someone who has had a miscarriage is, “You know what, that’s really crap”, There are always phrases of “You’re meant for something else” or “It’s for the best”.  Don’t try and make it sound better. It is crap. Sometimes it’s nice to hear people say it like it is. Just be real.

In a church environment miscarriage is a taboo conversation. But I had a friend walk through all my miscarriages with me. I had another couple we linked up with who did IVF at the same time. We were both doing the needles at the same time on the phone together. I want to build a space where people who have walked the walk can be alongside others. The more we talk, the more people have somewhere to go, and the more they have someone who knows.

Pray for peace. Pray for people to feel God’s love and support. Even though one in four women miscarry, you feel like you’re one in a trillion. There’s nothing you can really do for someone other than to sit there and hold their hand. Pray for more awareness around miscarriage and infertility, for understanding and for the discomfort to be removed so people can talk about it.

I don’t want people to feel sorry for me. This has been absolutely horrible and I’ve got a long road ahead of me. But people go through far worse than what I’ve been through. I want people to know it’s real, it’s happened and it’s important to reach out. I’m not special or brave. I’ve gone through this with Jesus on my side. On my own, I couldn’t have done it.

As told to Tara Sing.