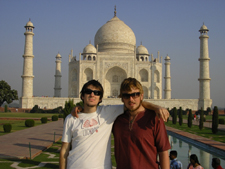 Tonight we write from the house of some Catholic brothers who literally took us in from the street. After arriving from Jaipur on an overnight train we were somewhat tired and smelly. It has been a hectic couple of weeks - riding over 1000km, chased at one point by a drunk truck driver, getting an engine rebuilt, seeing a dual fatality road accident,  getting a puncture and to top it off almost getting rolled…

Thus arriving in Mumbai we pulled into the first church we could find (happened to be a Catholic one) and told the brothers there we were on a mission from God. They have taken us in, showered and fed us, tonight we stay here and tomorrow we continue to meet with our other Christian brothers and sisters. It is a testament to the good Lord’s provision and the brotherhood we can enjoy even across ‘boundaries’ and a reminder to us to be welcoming and hospitable to strangers, however dodgy they look :)

‘Maybe we need to do a test to see if you and Nate are for real or angels cruising on a Bullet. Thanks for following God’s heart and bringing a dose of joy for all of us here, your help has been perfect timing. Keep spreading the joy!
Blessings and love from God’s team in Kashmir’

This was from Titus’ wife to us as we left Kashmir, what an honour for our work to be well received like this. Vindication of a decision we made trusting in the Lord that it was the right one.

Eid…
On the Muslim calendar Eid is the equivalent of Christmas. Eid fell on the day we left our friends in Srinagar to ride back to Dehli. That night we stopped in a small town called Banihal and found some basic accommodation for the night. While we were negotiating a suitable rate, a Muslim man approached us and asked if we’d like to come to his house to have dinner with him and his family. After exchanging sideways glances we graciously accepted. The house was typically stuffed with miscellaneous family that all lived under one roof, the hospitality was outstanding. We discussed the differences between the Qu’ran and the Bible with them both open on the table (they supplied an English version for us). At dinner the main course was sheep’s stomach, as we were the honoured guests we had the priviledge of having the largest portions. Nathan’s piece of sheep’s stomach magically jumped onto Julian plate when nobody was looking so Julian was fortunate enough to have extra helpings. This was our first look inside a Muslim household, after this experience we hope we get many more opportunities.

An engine rebuild for $30…
You have to love India. On the way to Tangdar with the earthquake relief team the motorbike developed a large hole in its air cleaner hose. As a result of this hole the mighty Enfield imbibed a large amount of dirt and stones straight into the engine. This resulted in a rather disturbing clattering sound on acceleration and a dramatic loss in compression coupled with a large rise on oil loss. About half way back to Delhi we decided the mighty Enfield wouldn’t make the trip in this state , so we took the opportunity to visit our Sikh friends in Phillaur again and avail ourselves of the local mechanics.

For the princely sum of $30 they rebored the cylinder, replaced the piston and rings and replaced all gaskets to make the Enfield as good as new. Revisiting our Sikh friend also gave us the chance to revisit the conversations about the gospel with them, on our departure Nathan was moved to give away his Bible to them under the instruction they had to read the gospel of Luke. It’s funny the way God works, he can use broken motorbikes to further his divine cause and purpose.

On our stopover we also got bailed up by two reporters from the local Punjab paper who published an article about us in the local paper complete with photo. Look out for us in the latest Ludhiana Jagren.

Back to our roots with the good pastor… 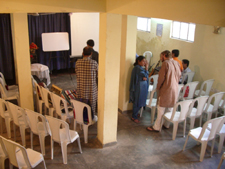 It was something like a home coming returning to Delhi. Pastor George greeted us with a hug, a ‘Praise the Lord’ and a sigh of relief. He was genuinely happy to find that we were alive (it’s not a given that you return alive from Kashmir even for an Indian). He was interested in stories of the relief effort and asked if we could speak at church about it to which we obliged. His church, the Delhi Revival Centre, is held in a small underground room that would seat about 80 people at a pinch, the service again was a reminder that it’s not the building that makes the church. It was great to spend more time with Pastor Geoerge, hear some of his tales and refocus under his wing of wisdom. 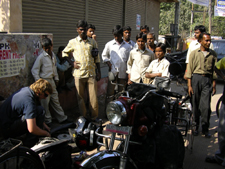 We had a dabble in tourism this week - India style. We checked out Agra and the Taj Mahal at sunrise. On the way out of town we got our first puncture. Rolling to a stop we spied a puncha-wallah (ubiquitous tyre fixing man) about 100m ahead. After pushing the bike there we started to take the wheel off and repair the hole. As per usual a crowd began to gather and drew so close it was difficult to move. Suddenly there was a great deal of shouting and we looked up to see a young boy absconding with Nathan’s backpack. He gave chase and the boy, hopelessly weighed down, let go of his loot in the middle of the road keeping only some cloth as souvenir. Confusion regined for the next five minutes as every Indian shouted at one another as to whose fault it was and worst of all they wanted to make up for it by being extra helpful by grabbing tools and the wheel out of Julian’s hands. Not to be be perturbed Nathan herded everyone back, instituting a 1m rule and we were back on the road before too long.

Missing the train
At Jaipur we decided to put ourselves and the bike on the train to make up some of the time after diverting to Kashmir. We booked the train for the following day but as it turned out, the train to Mumbai left us behind, it took our bike but left us on the platform, we were 5 minutes too late. After a hasty rebook we gave chase in a superfast express 6 hours behind. There were only two seat left on the whole train one in ‘sleeper class’ (sardines in a non A/C carriage) and AC II (spacious beds in AC carriage) Nathan being the gentleman he is, elected to place himself in the sleeper class, leaving Julian in AC/II with the luggage (more secure) Julian curious to see how the other side lived journeyed the length of the train to visit and found Nathan with some holidaying Swedes. The conversation soon turned to the trip and the gospel. It really encouraging for both of us and we gave our best explanations of the gopsel in plain English. Again how the Lord worked through us missing the train we were meant to be on.