This week we have remained in Mumbai staying with a cruisy brother called Pastor Roy. We were primarily here to collect our second motorbike - a Yamaha XT600, sent from Australia. We have been staying with Roy while we wait for the Yamaha to clear customs - a frustrating process that will end up costing as much as it actually cost us to ship the bike in the first place due to the Mafia that run the docks and much of the city here.

When India got thrashed by South Africa this week, the general consensus among the greater population of Mumbai was that the Mafia had fixed the match to line their pockets and the pockets of the players. Indians think their crickets players’ patriotism only runs as deep as their pockets, except of course until they play Pakistan…

Another typically Mumbai experience is the local train. Getting on and off trains is extremely dangerous, like a massive rugby maul where people are charging around barging one another ot of the way. The Mumbai papers have a daily death count for the railways from people getting trampled to death at the doorway of the carriage, falling out while it’s moving, or crossing the tracks… 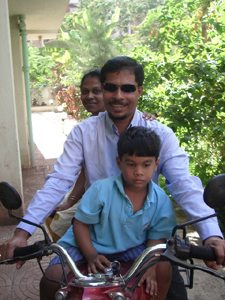 Pastor Roy met his wife Princess (yes real name) at Bible college and they ended up having a rare “love marriage” Despite this things are working out well and they now have two sons Josh and Sammy. Roy works for the equivalent of the Anglican church here, called the Church of North India. He is committed to the work of the Lord, often out to midnight doing house visits to pastor his flock. Pastor Roy earns an equivalent of $90 a month, which even here doesn’t buy much. So, to support the family Princess works the night shift at a call centre, selling satellite TV to Americans. Here we have also adopted an Indian Grandmother “Amichi”- Roys mother who lives with the family. We communicate via hugs and one word we have learnt in her native tongue- “Stottaram”, which means ‘Praise the Lord’! 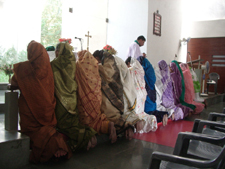 During our time with Pastor Roy, we also went to a baby dedication, household prayer meeting (guys in one room, girls in another) and gave the sermon at his church on Sunday. The latter coming about after Nathan volunteered Julian unbeknown to him, however Julian made sure Nathan was very much a part of it.

Our stay was longer than expected due to our wait for the bike, however it has meant we’ve had a good chance to see some of the work that is going on here…

Pastor Roy took us to meet some friends of his working here in Bombay with some of the most hardcore disadvantaged people we have ever encountered. The mission started from one brother named Pastor Phillip who picked up a destitute kid from the street, the kid could barely move and was relying on passersby to thrown him food to survive. Looking for a facility for the poor, disadvantaged or sick in which to place the child, the pastor found the young bot would not be accepted anywhere as he had AIDS. The pastor took the child into his own home and since in the past seven years has taken in many destitute people with AIDS, mental illness, horrific wounds and other aliments that are not covered by other agencies.

It’s pretty cool, the brother saw a need and responded to it. It didn’t necessarily fit into his life plan and he didn’t really have the resources to run such an operation, but through his faith the good Lord has provided. When we visited this man’s place there were more than 60 people in residence and he was talking about plans to build a bigger facility to accommodate more… check out the website at www.sealindia.org 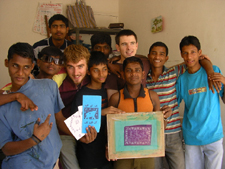 A centre for young railway children (street kids) to come gain vocational training in electrician work, tailoring and screen printing, skills that they can use to break them from the poverty cycle. We were really impressed by the holistic approach of this ministry. Apart from giving vocational skills, the centre makes sure its kids are clothed have food and shelter and most importantly take keen interest in their spiritual well-being. We were privileged to be a part of their daily morning worship and see some of the life changing stuff that is going on here,  not just in terms of training but of the good Lord taking lives and transforming them.. and Julian got a sweet bible cover made in the tailoring department.

For us Mumbai was just meant to be a ‘business’ stopover grab the bike and run. What it became was a real eye opener for us both, and we have been privileged to see the Lords people at work in his service in extremely trying conditions.

It is challenging to think about our own lives in the west- how much money + resources we have and how easily we fall into the mindset of providing for ourselves - it is the Lord who provides - and many here do their ministries on faith in this fact - they have to!  It is almost a blessing to have nothing as it teaches a firm reliance in God’s provision.