This week we’re based in Srinagar the capital of Kashmir, entrenched in Muslim culture. You cannot escape it. Muslim prayers belt out of the loud speakers 5 times a day, ladies wear burkahs, men wear prayer caps, and we’re forbidden to wear shorts outside!!! This being during the holy month of Ramadan means people are feeling extra sensitive (mostly due to fasting) - it was cool to meet and chat with some of these people about what they believe. Got connected with the local Christians, joined in the prayer and praise also got in and helped move house, fixed computers, motorbikes and cars where we could and took a trip up north into the mountainous north of Kashmir to the earthquake zone.. 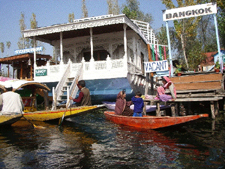 Day on the Lake

Srinagar is the centre of much conflict in Kashmir. They reckon that the ratio of Indian military personal to civilians is 1:2 as the Pakistanis militants, local Kashmiris and the Indian government all fight for a piece of what is a beautiful part of the world - set around a sweeping lake and encased by massive mountains. On sunday it was nice to escape the military presence in the city and spend a bit of time on the lake with some believers here. We met on a houseboat, a kickback from the British colonisation of India. It was a chilled day relaxing on the Sabbath, reading the Word, eating some serious Indian cuisine and just cruising on the lake… 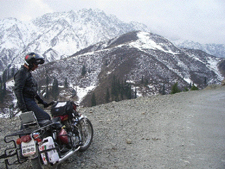 This week the hectic Indian highway opened out into some sweet open mountain paths. We climbed to 3200m as we crossed a snowy mountain pass, rode dusty tracks, forded streams and contended with soldiers as we headed to Tangar on our mission.

Titus’ tent has been gaining momentum in the past week as the government and NGOs realise it is a great idea and is feasible. People want to see action though, so he was asked to erect a double sized shelter in a remote village near the Line of Control with Pakistan where many houses were destroyed by the earthquake. The double shelter would serve as a school to replace on that was destroyed in the quake. Our mission was to accompany Titus and his team and reach this school (we had been advised it was unlikely we would make it past security) and erect a new building, thus giving evidence that this shelter worked under real conditions.

In our convoy were 2 cars and 1 motorbike (us). We picked up some government officials who enabled us to get through the tight security. As we neared the village we passed clusters of smaller ‘tent’ villages filled with people seeking refuge from their earthquake affected villages.  After reaching our destination in a village called Tarboni (part of the greater Tangar area) we began to survey the damage. A number of other NGOs were there working on separate projects including our brothers from Sikhs United. We carried the building materials on our shoulders up the hill to the site of the new school. As darkness fell, we endeavored to find our way back to the car but got separated from the rest of the team.

At this point we encountered a Sikh brother who wasn’t too flash on the English and we asked him to take us back to the car, he promptly led us stumbling through the dark to his cousins house where we were received by a large number of smiling Sikhs. With the fate of the rest of the team unknown we decided to stay put and wait until the morning. After donning Turbans, eating dinner and bunking down in their living room (which was barely standing due to earthquake damage) things were looking rosy. One of the boys in the house was a Mechanical Engineer like Julian called Randeer Singh we affectionately called him Run DMC. 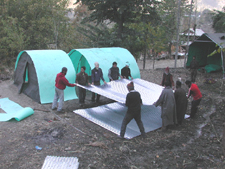 The next morning at first light we returned to the construction site, met the others and began construction of the shelter. As this was still an early prototype there were some teething problems but we were able to complete the project by midday. The locals were really happy, and we had a number of enthusiastic onlookers throughout the project. As we left many asked when we would return, and when they could come to Australia/ NZ to visit us. After the journey home we slumped into our beds and reflected on the past 36 hours, it was very rewarding, and we praised God that we got a chance to really make a difference to some peoples lives.