On The Way With MLK 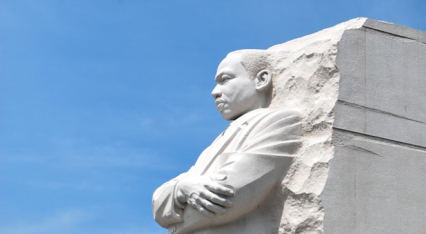 This Wednesday (April 4) marks the 50th anniversary of the assassination of Martin Luther King. He was 39 years old. April 1968 is also the month that I was rescued from the consequences of my rebellion against God through the death and resurrection of the Lord Jesus Christ. I was 16 years young.

And strangely enough, although I ‘went forward’ at the Billy Graham Crusade on the last Sunday of that month at the Wollongong Town Hall, where a crackly old loud-speaker was broadcasting Billy from the Sydney  Show Ground, it was King, and not Graham, whom God used to play the bigger part in getting me across the line.

In the years before, I remember noticing that my sister had been reading the Bible and praying, going to her school Christian group and telling me about the sorry state of the world, and my soul. I started to take an interest in the genre of music that came to be known as the Songs of Protest. Dylan, of whom I was already a fan, featured prominently in my play-list. Then, again through my sister, I became more aware of the Civil Rights movement that King was championing. I was being forced to face some of the bigger questions of life.

Other factors were also at play. I had started going along to a church youth group. I wasn’t listening too closely to the talks from the front. But a very faithful fellowship leader had my ear on several occasions as he drew my attention to the claims of Jesus from John’s Gospel.

Then April 1968 came crashing in on me. We were driving to Canberra. Mum and Dad in the front seats. Liz and me in the back. King’s assassination headed a news bulletin as we drove up Macquarie Pass. My sister was in tears. I sat in bewildered silence.

Sometime that month I had acquired a copy of King’s little book of sermons entitled Strength to Love. I can’t remember whether my sister gave it to me, whether I pinched it from her bedroom or whether someone at church gave me the copy. But it was my first ‘Christian book’ and possibly the first book I ever read, apart from comic books and novels I had to read at junior high school.

King occupied my consciousness for years to come. In 1972 I was conscripted and became a conflicted and involuntary soldier during the later stages of the Vietnam War. Had it not been for my father’s WW2 service, I may well have become a ‘conscientious objector’, but it would have gutted Dad, and Mum. I chose a middle path and decided to decline any combat role. I was far too naïve and immature to understand or embrace the non-violent civil disobedience that he espoused.

But at the start of my six months of ‘boot-camp’ a friend gave me a copy of King’s I Have a Dream speech on a reel to reel tape. I was in a training unit where we had the luxury and privacy of single room barracks rather than dormitories, so I was able to play my tapes quietly after lights out. I listened to that King speech every night before drifting off. It kept me sane, or saner than I would have otherwise been.

Strength to Love remained in my library and was readily referenced for decades, even though I suspect I developed a distinctly different theological position to him on many issues. It’s hard to tell. He died so young and wrote so little. But his undying conviction to put the words of Jesus in general, and what we call The Sermon On The Mount (Matthew’s Gospel Chapters 5-7) in particular, into practice, has been a life-long challenge to me.

Has there ever been a man in American history, black or white, president or preacher, who has caused so much controversy and yet given leadership to so much social change, that a national holiday is celebrated in his honour?

One of the most significant things I remember King writing was about forgiveness. Whether he taught me all of the following suite of lessons from Strength To Love, or just some of them, I have been greatly challenged by these suggestions when gripped by the temptation to be unforgiving:

I am only all too aware of the suspicion that many conservative evangelicals have had of King. How orthodox were his beliefs? Was he one of the early fathers of liberation theology? Even if he was a personal friend of Billy Graham and believed in the need for personal salvation, did he eventually go too far and concede too much to a social gospel?

The alleged plagiarism and philandering deepened that suspicion. The FBI had so much surveillance on him that it makes the vigilance and the endless number of camera angles at Newlands Stadium in Cape Town recently seem amateurish by comparison. He was as aware his flaws, as he was of forgiveness.

How far to the left King’s theology ended up is hard to guess. If his gospel was or became ‘revisionist’ and ‘social’, was he drawn there by conviction or driven there by the racist, red-neck, white-hard-right Southern American Protestantism of his day? I was chatting about this with a close friend in South Africa recently, (the conversation that birthed this blog, I think) and he proposed the same possibility about Desmond Tutu’s shift into theological liberalism.

When one of the most famous political mantras of the 60’s was:

All the way with LBJ

I am grateful to God that I:

Started on The Way with MLK