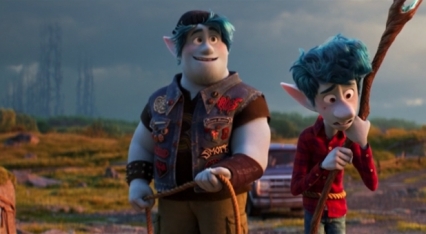 A heartwarming tale of two brothers, ancient magic and an epic quest to bring their father back from the dead. Onward is the latest in Disney Pixar productions exploring the core emotions of the human experience of family and loss through the lens of folklore and fantasy.

We are thrust into a world where magic died out because modern technology made life more convenient and where the lightswitch is easier to master than the light spell. We meet elf brothers Barley and Ian Lightfoot, whose father passed away before Ian was born. Ian (voiced by Tom Holland) struggles with self-confidence but is determined to reinvent himself. Barley (voiced by Chris Pratt) is his dungeons-and-dragons playing older brother, passionate about history and magic.

“...the lightswitch is easier to master than the light spell…”

On Ian’s 16th birthday, their mother presents the boys with a gift from their father, a strange looking staff and a spell that promises to resurrect their father for one day. Ian imagines all the things he will finally be able to do with his dad. However, the spell goes wrong and only half of their father is brought to life - the bottom half to be exact. The clock is ticking, the boys have less than twenty four hours to find the Phoenix Stone that will allow them to finish the spell and bring the rest of their dad back.

A tale of two brothers

Onward is a mix of joyous triumphs and tear jerking moments. There is a refreshing vulnerability between the brothers, as Barley and Ian encourage one another to succeed and display gentleness towards each other. On one hand, it’s what we’ve come to expect from Disney movies. The physical quest leads to the boys discovering who they are and their victories give them the confidence they need to be true to themselves.

The movie provides space to discuss the impact of losing a family member as well. Both the boys major character traits, Barley’s determination to show no fear and Ian’s insecurities, stem from the death of their dad. We all process and are affected by the death of loved ones differently. Many can relate to either or both of the boys as they wrestle with who they are.

The sibling and family focus of Onward bear similarity to Frozen, Moana and Big Hero Six. If your family has seen these movies and enjoyed them, then a magical tale of two elf brothers and a pair of legs will make for a delightful afternoon.

One detail some families might like to be aware of is a passing reference to a homosexual relationship between two minor characters. The line from a female police officer goes: “It’s not easy being a new parent – my girlfriend’s daughter got me pulling my hair out, okay?”  I actually missed the reference when first watching, but researching the film afterwards discovered that this dialogue led to it being banned in several Middle Eastern countries.

A father loved but never met

Ian has never met his father, but he loves his father greatly. He listens to old cassette tapes of his father’s voice recorded. He has his father’s pictures on display in his room. He celebrates his sixteenth birthday by wearing his father’s sweatshirt to school. When offered the opportunity to spend twenty four hours with the dad he never met, he doesn’t even have to think twice about how he wants to spend that time. He wants to play catch, he wants to laugh and tell jokes, he wants to do it all. His urgency to complete the quest stems from not wanting to waste a single minute, because time with his father is so precious.

I can’t help but be reminded of our relationship with God the Father. In one sense, we long for the day when we will see our Father face to face. We too listen to his voice, recorded long ago in the words of scripture. We fix our eyes on Jesus, the image of the invisible God. We clothe ourselves not in his old sweatshirt (although many of us often wear Christian camp apparel) but in the armor of God so that we can stand firm in our faith. But unlike Ian’s temporary time with his dad, we are blessed with the assurance of a room in his house, where we will get to be with him forever. The apostle Peter sums it up nicely.

Though you have not seen him, you love him; and even though you do not see him now, you believe in him and are filled with an inexpressible and glorious joy, for you are receiving the end result of your faith, the salvation of your souls.
- 1 Peter 1:8-9