Pastoring a Sydney church from an Airbnb in Scotland 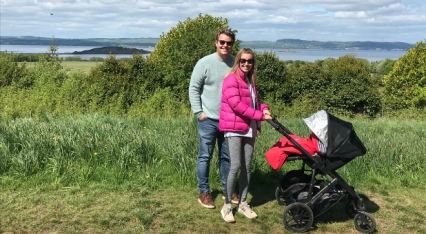 The Rev Daniel McKinlay and his family arrived in Scotland in February to visit family in their home country. Then the world shut down. He is an assistant minister at South Head Anglican but is ministering to the church from an Airbnb in Edinburgh. As temporary residents, they have no idea when they will be able to return.

Having travelled to the US and to England prior to landing in Scotland, Mr McKinlay was unaware of his exposure to the virus.

“I was running an event in London, at the Tate Modern Art Gallery, which is right next to St Thomas’ Hospital,” he says. “It was overrun with ambulances. We had no idea what was going on, we only knew COVID-19 meant we had to ask people to wash their hands.”

“It was overrun with ambulances…”

After a week of holiday with family in Edinburgh, he and his wife Kirsten fell ill with virus symptoms. With no tests available to him or his family in the UK, they hunkered down and isolated themselves in their accommodation, trying to get well. “In the midst of this, we got messages from people [in Australia] asking if we were stuck,” Mrs McKinlay says. “We realised there had been announcements in Australia asking people to return.”

By the time they were well enough to consider travelling, Australia’s borders had closed. Since then, Mr McKinlay has been sending sermons from Scotland and attending a number of Zoom meetings. The added difficulty of the time difference makes a tiring situation even more exhausting, but he is grateful to be able to work remotely.

The flat they rent in Rose Bay remains empty. They live fortnight to fortnight, waiting for news on when they can return to Sydney with their nine-month-old daughter. “The toughest thing is the uncertainty of not even knowing,” Mrs McKinlay says. “But James 3 reminds me that it’s absolute foolishness to think we have control over what tomorrow holds, let alone what next year will hold.

“James says it’s arrogant to boast. I didn’t feel proud or arrogant assuming the year would pan out like I thought, but it was arrogant. All my plans are still in our calendar, but dates in a calendar are vague hopes at best in contrast to the certain hope of the one day that is definitely coming. It’s a cliché, but it’s a real comfort.”

“...dates in a calendar are vague hopes at best in contrast to the certain hope of the one day that is definitely coming.”

Adds Mr McKinlay: “I’m convicted about just how comfortable life is for most of us, most of the time. We worry about things like our purpose, and various aspects of how life will turn out. Rarely do we worry about the bare necessities or having to make decisions about life and death, but generations before us had to make these decisions. It feels like wartime.”

The experience has encouraged Mrs McKinlay to pray more earnestly for governments. “I see how weary the government here in Scotland is,” she says. “What an incredible burden they bear. I don’t envy them but, looking at them, they are very much creatures like the rest of us, with limits and sin and huge responsibilities. I pray for them that God would give them wisdom.”

“Our prayers are also shaped to be much more about gratitude,” says Mr McKinlay. “We’ve experienced a different kind of prayer life. Even as we sit down to eat at night, we reflect on how God has been good to us during the day. The temptation is just to criticise and grumble.”

The couple continues to pray for the new openness many in Scotland are also displaying towards God.

Mrs McKinlay: “Pray God will indeed use this time to bring people back to himself. Pray that we would make the most of every opportunity, have eyes for the good works God has prepared for us here. We have been [in Scotland] for a while now, and I can get complacent. God has given us good work to do wherever we are.”