Preach and paint: Michael’s mob gets the message 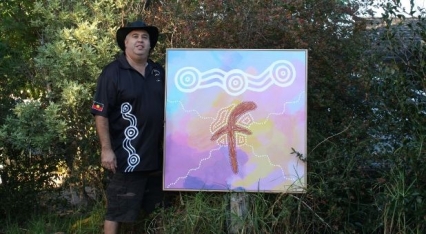 “I think people understand better when you have a visual aid, especially my people. We are image people… we are more of a visual culture,” says Aboriginal Pastor Michael Duckett as he explains why, every year, he breaks out the paintbrushes to do an artwork for NAIDOC week (July 7-14).

Communicating the truths of the gospel and reconciliation

Mr Duckett is pastor of the Macarthur Indigenous Church, which shares links with other Indigenous work across the Diocese, many supported by the Archbishop of Sydney’s Anglican Aid. Seeking a way to communicate both the truths of the gospel and reconciliation issues important to Aboriginal people, Mr Duckett hit on painting.

“I get up and preach using my painting. I take people on a journey through it – highlighting the themes of NAIDOC and the need to recognise them. Then I give it from a godly perspective, how we should also complement and recognise what God is saying.”

"I preach using my painting"

So, as Mr Duckett preaches to the NAIDOC service on the lawn outside St Peter’s, Campbelltown, the painting will convey the themes of NAIDOC week this year: Voice. Treaty. Truth.

“Voice. Treaty. Truth. were three key elements to the reforms set out in the Uluru Statement from the Heart,” she says. “These reforms represent the unified position of First Nations Australians.”

Mr Duckett says the themes work well in a Christian framework. “I think that what I have painted helps show the message I like to convey, that all languages come from God and we have to listen to all voices, especially our people.Then I have treaty – painted through the cross, which is an extra point of treaty through reconciliation. Then truth – I have the message of our history and then the message of the cross, which is truth. It is the beginning of truth.”

"Treaty - painted through the cross"

Among the crowd at the service each year are members of the church, local community members, and brothers and sisters from “the mob” at St Peter’s who are, as Michael Duckett says, “partners in the gospel: that's how I view it”.

The importance of partnership with Anglican Aid

The partnership with Anglican Aid is important to the Macarthur church, as it is to other Indigenous ministries – including the Living Water Community Fellowship at Redfern, The Scarred Tree at St John's, Glebe​, Rough Edges at St John’s, Darlinghurst, One4Life at South Sydney Anglican Churches in Redfern and the Indigenous outreach in the Armidale Diocese through St Peter's, South Tamworth.

Anglican Aid helps support community and outreach programs at these churches because, as Mr Duckett points out, “often our services are in the community. A lot of our community might not come to church but we go to them”.

It is an exhaustive (and exhausting) list of services around which Mr Duckett has to fit his painting. But he is convinced it helps. “I only just finished my NAIDOC painting last month. I know our people appreciate it but the other thing I find is that a lot of non-Aboriginal people get the different depths of it – depending on what they want to see. I can only guide people. As for what they interpret, well, I let God do that.”