Rejoice that He is with us 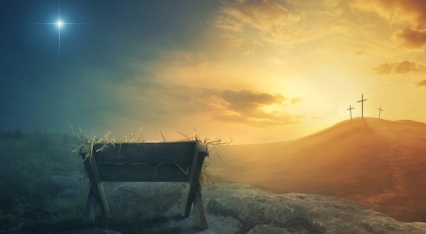 Emmanuel is, for me, one of the most precious words in the New Testament. The Greek word is a transliteration of the Hebrew phrase, meaning “God with us”. Although only occurring once in Matthew 1:23, where it is a translation of the Hebrew phrase that appears in Isaiah 7:14 and 8:8, it is rich in meaning and has become regularly associated with both Advent and Christmas carols. Jesus is our Emmanuel (or Immanuel to reflect the original Hebrew).

Jesus is not merely human in origin, but also divine – God with us. Yet Emmanuel speaks not only of God’s coming to earth in the incarnation of the Christ, but of God’s dwelling with us now through the breathtaking intimacy of Christ’s dwelling in us by his Spirit – Christ in us, ‘the hope of glory’ (Colossians 1:27).

The most memorable of the Advent carols is “O Come, O Come, Emmanuel”. The text of this hymn is usually dated to a Latin text of the 12th century, but was translated into English by J.M. Neale in 1851. Ten years later, he revised it for the first edition of Hymns Ancient and Modern, and it became widely popular having been associated with the uplifting tune we know today, appropriately titled Veni Emmanuel.

Originally, J.M. Neale translated the first line as “Draw nigh, draw nigh, Emmanuel”, later changing it to the familiar and more evocative words, “O come, O come, Emmanuel”. The hymn’s first stanza speaks of the coming of Emmanuel to ransom captive Israel. This reflected Isaiah’s prophecy of a sign that God would rescue Israel from the threat of foreign invasion, yet Israel’s deliverance from Babylonian captivity in the years ahead provides an echo of Isaiah’s promised Emmanuel. The refrain reminds the people of Israel that as God rescued them in the past, so he would rescue them again: “Rejoice! Rejoice! Emmanuel shall come to you, O Israel”.

The hymn also recalls how God came to the tribes of Israel on Mt Sinai to give the law, “in cloud and majesty and awe”. As he came then, he shall come again. The refrain is not merely a wish or even a prayer, but a declaration of the certainty of the coming of Emmanuel.

Advent, of course, is not just a time to reflect upon the coming of Jesus to Israel in his incarnation, but also a season for reflection upon the second coming of Christ to save people from every tribe and tongue. Thus the hymn broadens the horizons from national Israel to King David, Jesse’s son, who will be an ensign to the peoples, whom the nations would seek (Isaiah 11:10).

unto your own and rescue them!

From depths of hell your people save,

and give them victory o'er the grave.

It is not just ransom from human captivity that the writer contemplates, but victory over death. The Son of David would open the door of heaven to all believers and God would dwell with them forever (Revelation 21:3).

and open wide our heavenly home.

Make safe for us the heavenward road

and bar the way to death's abode.

Finally, Jesus is described not just as King of Israel, but as “King of the nations”.

In one the hearts of all mankind.

Bid all our sad divisions cease

And be yourself our King of Peace.

The refrain now naturally widens the compass of Israel, for Jesus has reconstituted the 12 tribes of Israel through the 12 apostles of the Lamb. It is now truly multi-ethnic, as it includes the nations of the earth. As Christians, we rejoice at the coming of God to us as his Israel of the new covenant.

The Old Testament refrain “I shall be your God and you shall be my people” is associated with God’s dwelling among his people, symbolised by his presence in the temple. This theme resounds throughout the Scriptures (Genesis 17:7, Exodus 6:7; 29:45; Jeremiah 32:38; Ezekiel 14:11, 37:27). However, the new covenant fulfilment of this promise is not just the coming of God in the flesh, but also the coming of the triune God by his Spirit to take up temple residence in the heart of every believer. “My Father will love them, and we will come to them and make our home with them” (John 14:23).

As we celebrate this Advent season, we usually reflect upon the incarnation and the second coming, which is right and proper. However, the gift of God’s Spirit strengthens us to live by faith in this age, as we await the age to come. We live in the overlap of the ages, while we await Christ’s return. Let us therefore celebrate the gift of Emmanuel in the present – God with us in the here and now. May we rejoice this Christmas in the incarnation of God’s Son, but may we also rejoice in Jesus’ final words to his disciples: “Lo, I am with you always” (Matthew 28:20).

A very blessed Christmas to you all.