The Rev Canon Howard Dillon AM RFD has died at his home in the Southern Highlands of NSW after a short illness.

Howard was born in his grandmother’s private hospital in Messiter St, Campsie, the third son of the Rev Rudolph and Gladys Dillon. He was educated at St Andrew’s Cathedral Choir School and Canterbury Boys' High. Howard loved reading and was a good student. Music was part of his life. He began his theological studies at the age of 22, having committed his life to Jesus a few years earlier. He graduated with honours from Moore Theological College in Sydney and spent the rest of his life as a dedicated servant of the Lord Jesus.

Howard has served within both the Sydney and Melbourne Anglican Dioceses in a wide and comprehensive ministry stretching over a period of 45 years. 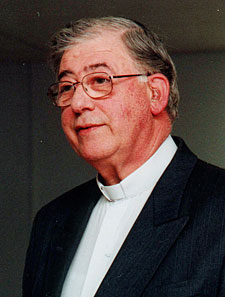 Following his curacy in the parish of Willoughby, Howard became a Regular Army Chaplain which included a 12-month posting to war-torn Vietnam. His courage in active war zones and his devotion to the men to whom he ministered was widely known and appreciated. Upon his return to Australia he had the responsibility of training soldiers in relationship to each other, their families and the community at large. He developed for that purpose a character guidance course which has been very influential in the training of military personnel.

Having transferred to the Army Reserve he took up ministry in the Parish of Bowral in 1973. It was a critical time in the development of that conservative parish and Howard with his very supportive wife Aileen, and their family assisted that church in its growth and its witness to the community at large.

From Bowral he was invited to the Melbourne parish of St James Ivanhoe (1977-1982) followed by a number of years at Holy Trinity Doncaster (1982-87). It was obvious that despite his Sydney Evangelical origins he quickly settled into the Melbourne scene and became widely known and recognised as a caring and compassionate leader and accomplished preacher.

In 1987 he accepted the responsibility of Executive Director of the Mission of St James and St John, which reached across the city of Melbourne in the ministry to families in need. This job included the responsibility of the Incumbency of St James’ Old Cathedral. Because of his strong evangelical beliefs he did not always have the full support of other churchmen in Melbourne and was saddened by that awareness. However Howard never shirked a challenge and he used his considerable talents to play a leading role in the bringing together of a number of disparate Anglican welfare organisations which later became known as Anglicare.

His strong biblical beliefs and his desire to see the Anglican Church retain its loyalty to the Thirty-Nine Articles led him, with others, to be involved in the establishment of the New Cranmer Society of which he was founding president.

His administrative gifts were employed in the challenging role of Archdeacon of Melbourne and Director of Diocesan Services in that Diocese. This gave him the opportunity to widen his fields of ministry from everyday administration and pastoral care to the development of a strong evangelistic outreach particularly to young people. Integrity, hard work, wisdom, humility, humour and great personal discipline were important characteristics of his ministry.

Appointed as an Archdeacon within the Diocese, he had 46 parishes under his immediate supervision. His leadership and tutelage was enhanced by his wide "life experiences' which were a great encouragement to those for whom he had such a caring role. He was appointed an honorary Canon of St Paul's Cathedral in 1991.

Canon Dillon returned to Sydney in 1996 following his acceptance of the role of Executive Director of the Anglican Home Mission Society (later Anglicare). It was a time of great change. Government regulations were impinging on the freedom to expand and develop the many faceted aspects of this, the largest Anglican welfare organisation in Australia. Howard in his quiet yet determined way won many of the battles that had to be fought. He established protocols by which every one of the 1000 or more staff members felt that they could get a hearing and that they were making a worthwhile contribution to the cause. He was able to streamline administration so that donated funds could be released to more generously meet the needs of the poor and disadvantaged while at the same time improving the working conditions of the staff.

He strengthened the links between the parishes and the organisation with the major aim of helping people to see the theological basis on which the work of Anglicare was built, rather than feed the perception that welfare was separate from evangelism. He was a visionary who had the ability to explain clearly where he was heading and to carry people with him as he challenged them to accept new and progressive ideas.

Howard was a devoted husband and father. In his retirement he acted as locum in the parishes of Eaglevale, Macquarie Fields and Kangaroo Valley where he was much loved and his ministry greatly appreciated. When he had a moment he loved to read, listen to music and hitch up the caravan and head for a spot of fishing. He had recently gone on safari in South Africa with his wife Aileen, escorted by their professional guide and daughter Alison. He returned home to be faced with the medical diagnosis that he had only a short time to live. As in his whole life he faced this next challenge with prayerful acceptance and a determination to show that by the way he faced up to this illness he would leave a legacy that would bring people to God. In this too, he has succeeded. In peace he has gone home!