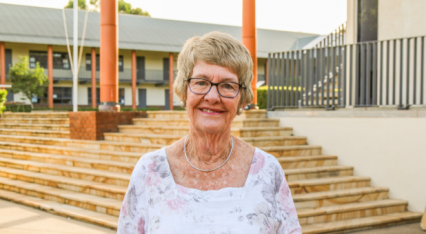 The impact of the ministry

“We had a boy... he was a horror. One of the teachers bought her class bibles when they finished Year 6. When she left the room, this boy left his Bible on the desk. She knew it was his because she’d put his name on it.

“She came to me really upset saying, ‘He was the one I really wanted to have the Bible’. I said, ‘Give it to me and I’ll go and find him’. I found him and he came up to me in the playground rather sheepishly – he saw what I had in my hand. I said very gently, ‘Why did you leave it on the desk?’ He paused and then said, ‘I didn’t deserve it. I’ve been badly behaved all through Scripture, so I didn’t deserve it.’

“I said, ‘Your teacher would really love you to have it. She’s written in it for you. And I think God wants you to have it so you can read about him and find all the stories you’ve heard in Scripture.’ He took it. And you wouldn’t believe it, years later we heard he was a leader in the ISCF [Inter School Christian Fellowship] group in the local high school. They’re the stories that make you keep going.

Why she started teaching SRE

“I had no idea I was going to become a Scripture teacher. I was asked to relieve for a week for a girl who was going away with some friends to the Blue Mountains. I took my son, who was six weeks old, in a bassinet. I said I could manage that for one week. Sadly, the girl was killed [in a car accident] on her way back from the mountains. It was horrendous. I was relieving her class and I just took it upon myself to continue [teaching] with the idea that someone [would eventually] relieve me but that never happened. Forty-five years on, I’m still teaching there!”

Building relationships with the school

“I’ve been at Murray Farm Public School a long time. You need to communicate [with the school]. We get so much co-operation from them. When a new principal comes, it’s the [school] staff that tell them, ‘Look after the Scripture teachers’. That’s really nice. We have made an impression.”

"I think prayer is vital"

“I always had a meeting with all the SRE teachers from every religion at my house at the beginning of the year. Now, there’s too many of us. The school offered to host instead. They give us a morning tea at the beginning of every year. The teachers speak with us. We are always consulted and included.”

How she keeps going

“I think prayer is vital. Someone to pray for you. Our minister has allocated a school to each service. So that congregation is responsible to pray for the SRE ministry in that school. A lot of prayer goes into SRE.”

“Sometimes you do get a bit discouraged and think ‘No one cares’. But meeting as a team for a coffee and prayer after lessons helps. We debrief the lesson and discuss how things went; talk about how to answer hard questions. The cafe owners know who we are and what we’re doing. At first, they were a bit surprised. Now they ask where we were when we miss a week. It’s lovely that we can be bold enough to share with them. They see us as faithful servants at the local school. The Catholic ladies have started meeting like we do, too.”