Sharing Christ in the majority world 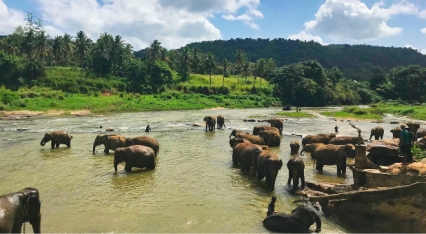 In recent years it has been a great privilege and joy for me to spend time with Christian pastors and ministry workers in Sri Lanka, the country of my family heritage.  I’ve had the opportunity to meet with local Christians involved in church and parachurch ministries, and to encourage them in word ministry, especially preaching and Bible study.

The Christian church in Sri Lanka is small.

Perhaps 7 per cent of the total population identify as Christian. Of that, more than half are Roman Catholic and the rest a variety of Protestant and Independent denominations including Anglican, Methodist, Baptist and Pentecostal.

Youth for Christ has a long history of bringing young Sri Lankan Christians together under one banner, and it’s a delight for me to spend time with a number of young men and women serving with Youth for Christ across the island. Among the issues faced by young people in Sri Lanka include bridging the gap between an “old world” traditional society and the globalised, technological world in which Sri Lanka seeks to participate; and recovering from the trauma of 30 years of civil war that ended just over a decade ago.

This year I was particularly keen to hear about the impact on Christians and local churches in the aftermath of the Easter bombings. On Easter Sunday this year, three hotels in Colombo and three churches, one in Colombo, one north of the capital in Negombo and one on the eastern side of the island in Batticaloa, were bombed within hours of each other.

More than 250 people were killed and more than 400 injured. In one church alone, a dozen children were murdered just minutes after completing their Easter Sunday School class in which they had confessed their trust in the risen Jesus as victor over death and Lord of life.

The bombings continue to affect life across the island, with increased security at churches and hotels. I noticed many more soldiers in public places than I have seen in recent years. An uneasy political situation prevails.

Nevertheless, I was told by one pastor, “The whole nation was discussing Easter. Everyone wanted to know what we [Christians] were celebrating on that day. Most Sri Lankans know about Christmas, but many are not so aware of Easter – which is the most important day for us!”

"Everyone wanted to know what we were celebrating"

Overwhelmingly, the reaction of the small Christian community was peaceful and full of faith, amid the tears and grief, bearing witness to a spirit of forgiveness and trust in God in a way that was widely acknowledged across the nation. In a land that has been ravaged by civil war in the so-recent past, the prayerfulness and restraint of the Christian community did not go unnoticed.

As I shared with a few of these dear servants of the Lord from the book of Acts, we considered some of the struggles of the first Christians in the face of rejection and suffering for the sake of Christ. I was humbled and deeply encouraged as some of the brothers and sisters shared their own experiences.

One young pastor, who serves in the eastern part of the island where one of the bombings took place, told of sharing the gospel in the market in one village. Some people wanted to know more and he began a weekly Bible study. One day, after visiting the small group of inquirers, he was walking home when he and his friend were pursued by four men in a tuk-tuk (three wheeled vehicle). They set upon them with wooden clubs and beat them until they collapsed on the road, bruised and bleeding.

Later they returned to the village and were told that the tuk-tuk and its occupants had veered off the road and the assailants had fled. The local people believed that God had punished those who attacked them, and many more of the local residents joined the Bible study group! The brother said, “I praise God for the joy of preaching his word and the privilege of suffering for his sake!”

In much of the “majority world”, where Christians are often in the minority, our brothers and sisters are prayerfully, humbly and joyfully making Christ known. They are sorely tested and materially resource-poor. But they are full of faith and patient in affliction, bearing witness to the grace of God in Jesus, and holding on to his promise that the Lord will build his church and nothing will prevail against it (Matthew 16:18).