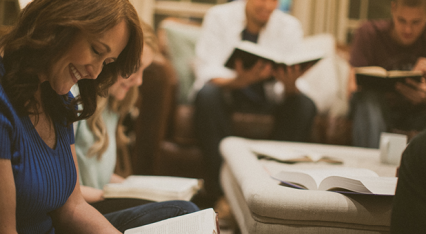 We can all fall, and fall away, but do we really believe it? And do we know how to keep ourselves travelling God’s way. Unfortunately, too many Christians believe they will never fall, yet every year our churches are scandalised by young and older believers alike walking away from Christ to chase what evangelical pastor Chuck Swindoll narrows down to the four worldly pursuits of fortune, fame, power and pleasure.

Spiritual dryness is a warning sign a person’s faith is being pulled in the wrong direction.

Condie knows about this intimately. For 10 slow years, she felt joy slipping through her fingers like hot sand. The parched feeling of prayers in her mouth. The dry cracks in her trust in God. The sapping of energy while trudging along a claypan of uncertainty.

“Reflecting on my life, I became a Christian when I was 16 – that was an amazing experience,” she says.

“My father died when I was 22 and no one knew how to do grief back in those days and I felt quite isolated. I didn’t feel isolated from God but it was a hard time. I don’t think I understood the impact grief has in wearing you down.”

At the same time, her husband Keith went to Moore College and she had to put his needs before her own. She worked so he could study and she began to feel like her husband’s faith and ministry were more important to God. This led to a few years of spiritual dryness.

“I didn’t understand what I was asking. I think I lost my sense of identity with God.”

During a second drought, Condie had to battle a serious illness that forced her to step down from her full-time job; all this at the time her oldest son was doing his HSC.

The cool, refreshing waters of grace bubbled within her soul once again when she was reminded that God loved her and she was his precious, beloved child. It was almost like becoming a Christian all over again.

It's about your identity

In doing this, she rediscovered her identity in Christ.  God used his word to speak to her profoundly, personally and deeply.  Over time, Condie has learnt the value of fellowship. Simply, Christians need to reconnect, she says. They need to reject the individualistic way of doing life and seek help from their brothers and sisters in Christ.

“God has wired us to be relational,” Condie says. “God gives us each other to walk with each other, to enable us not to fall.

“A lot of psychologists and specialists would say the best thing you can do to help your mental health is to connect with others. In connecting, you can wrestle with those questions and have other people’s voices speaking into that and say: ‘Let’s do this together. Let’s pray together. Let’s read God’s word together’. That helps you do the Christian life better.”

Steve Kryger, the chairman of Katoomba Easter Convention and BASECAMP, Kryge wholeheartedly agrees. He says he is surprised how isolated most pastors have become in modern society.

“They may have relationships with people in their church but most of them aren’t that well connected with people they went to college with or many other friendships outside of church,” he says. “There seems to be this big issue with pastors not having those connections.”

Kryger points to remarks made last year to The Washington Post by former US surgeon-general Vivek H. Murthy about how dangerous the epidemic of loneliness has become. “When you look at the data, what’s really interesting is loneliness has been found to be associated with a reduction of life span,” Murthy said. “The reduction in life span [for loneliness] is similar to that caused by smoking 15 cigarettes a day, and it’s greater than the impact on life span obesity.”

At a church level, the danger is more than just smoking. Says Kryger: “That’s a massive precursor to all the other things that are going on – the triggers that call us to sin because we have no deep relationships”.

"Churches need to actively build those relationships and create safe places where people can be open, honest and accountable to each other about their failings"