Living in the Next Phase: Developing the Theology, Practice and Ministries of Later Life

by Dr Andrew Cameron, with Rebecca Belzer and Caitlin Hurley

Available from Next Phase ministries

It may be the age I have achieved, but for me Living in the Next Phase: Developing the Theology, Practice and Ministries of Later Life is the first book on Christian life after retirement and beyond that I have ever taken seriously. Perhaps it is because Andrew Cameron refuses to engage in the patronising denial about ageing that is so commonplace in Christian, and other, circles.

You know the kind of thing; even the magazine of the Next Phase Ministries that has commissioned this important book through Anglican Deaconess Ministries is called 'Ageless', and here at Southern Cross we called an annual supplement on ageing 'Prime'. 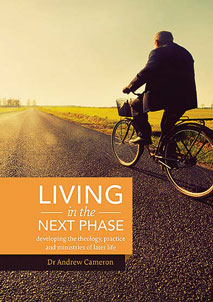 But Cameron begins by noting how hard it is for us to think about later life honestly and seriously. He names the roadblocks in the way of properly engaging with the topic: the obsession with youth which, in effect, tempts people to be ashamed of being old; a consumerism that devalues having less when one ages; the valuing of people in the world and the church in terms of their productivity; the shame of being dependent – and above all the scariness of death.

           Interestingly Cameron also notes the pernicious effect of what he calls “age cohortism” in our contemporary society and in Sydney Anglican churches, where people relate effectively only to those in their same age cohort. Age stratification is taken for granted today in Sydney Anglican parishes.

As an antidote Cameron outlines a nuanced biblical theology of later life in all its ambiguity, with on one hand the fearful prospect of decline and death, and on the other the opportunity for honourable maturity and the time to be transformed in Christ.

Paradoxically the book benefits from the fact that Cameron and his research assistants are younger than the age group he is writing about. He certainly writes with respect and sensitivity to his subject and regularly allows the voice of the ageing a real place, be it a Jim Packer, a Stanley Hauerwas, a Billy Graham or the late Patricia Judge.

But in not writing about himself Cameron avoids any hint of “look at me” and this allows him a helpful critical perspective on the issues. The book is also helped in that the publisher, Anglican Deaconess Ministries, is not a provider of aged care services – thus avoiding any suspicion of an institution trying to sell something.

The heart of the book is the two chapters “How to Third Age” (the often welcomed time of healthy retirement) and “How to Fourth Age” (the unwelcome time of failing health and increasing dependency). Here Dr Cameron brings his depth of thought as a Christian ethicist to bear on how to inhabit these two stages well. He describes the experiences of the Third Age with insight, noting that all change involves loss, even as retirement may bring new freedoms as well.

The Fourth Age is more daunting – Billy Graham is quoted saying, “Old age is not for sissies”.

I found Cameron’s raising of what he calls “the dignity of moral questioning” in these chapters most rewarding. In raising helpful questions about the settled habits and patterns of action and feeling (virtues and vices) appropriate in later life he treats his subjects with a dignity that avoids any subtle tendency to infantilise the old.

Living in the Next Phase concludes with a detailed and impressive discussion of ministry to and by those in later life that should be on the agenda of every church in the Diocese. We have rightly focused on children and youth and, more recently, cross-cultural ministry. Now with the ageing of the Australian population there is another group deserving more intense attention.

This book should be widely read.