Teachers are vital in schools 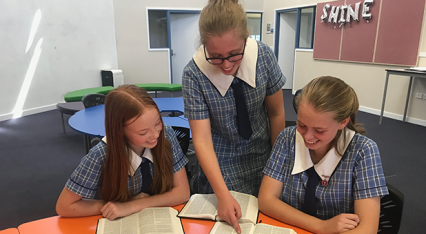 What does it mean to be a Christian teacher in a public school?

There are many ways for Christian teachers to be salt and light wherever they end up working, but Priyanka believes this is vital for teachers in the public education system.

Teachers are vital in the public education system

In an environment that is open to so many ideas and beliefs, and where Christians can be few and far between, it’s important to be aware of the opportunities for sharing and showing the love of Christ.

Opportunities for sharing the love of Christ

“I want to help new or existing teachers find their feet in how to be visible Chrisitans in what can sometimes be a hostile environment,” she says. “Whether it’s a formal program put in place, joining up with another organisation, or whether it’s something informal like a prayer meeting or a Bible study. It’s nothing prescriptive, it’s about being salt and light in a public setting.”

Priyanka says it’s important for Christians to remember that how they live speaks volumes.

“I’m so aware of people looking at me and saying, ‘How can you be a Christian and say this or that?’ We know the grace we have, so it’s about trying to find that balance of representing Christ in the most Christlike way, but also being a real person. There’s nothing worse to a non-believer than this fake, artificial, unreal representation of Christianity.”

However, sharing Christ is more than what we do, it’s also what we say. “Too often out of fear, Christians don’t speak up,” Priyanka says. “I get that. But we’re also called to be salt and light. We can speak into situations lovingly.

Sharing Christ is more than what we do

“I’m from a Sri Lankan background, and it’s been really good for people to see and hear a different version of Christianity that they wouldn’t see. Dominant Christian voices in the media are people who are of a particular generation and demographic, so to have a younger female from an ethnic minority representing ideas that they might have otherwise thought were very rigid and specific has been refreshing.

We don't have enough Christians in the public system

“I don’t think we have enough Christian teachers in the public system, and there are many who are quiet. The world is hostile to Christians, so it’s finding the balance and knowing how to navigate it. It’s about loving our staff members, our students and putting practical strategies in place that we can use to do good.

The world is hostile to Jesus

“Knowing also that we’re not on our own is important – we have organisations like Anglican EdComm who are there to support us.”

Priyanka shared her experiences at the Anglican EdComm seminar for new and preservice teachers last month.