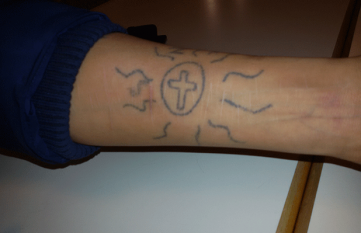 My name is Yashar Asghari. I am 24 years old, have two brothers and a sister, and have been in Germany for 11 months now.

Although Afghani, I was born and raised in a small city in northern Iran. My first 10 years were very happy but, when I was in third class, Mahmoud Ahmadinejad became President of Iran and forbade Afghans from attending school any more. My father did whatever he could to petition the government to change its mind… but without success.

A few years later, when I was 16, Ahmadinejad ordered that all Afghans to be deported back to Afghanistan. This made my father extremely angry and he grew increasingly disillusioned with Islam. When a friend explained the gospel to him one day, he became a Christian and began to wear a cross around his neck. He told us that we shouldn’t simply accept Islam but should decide what we believed for ourselves when we were old enough to make a decision. Then he was deported, leaving the rest of us behind in Iran.

I made a tattoo of the cross my father had carried around with him on my arm, even though I didn’t understand what it meant. This was very dangerous: if it was found, I could have my hand or head chopped off.

But I didn’t care. Islam had caused of all my problems and I had had enough. In the months that followed, we heard reports of my father travelling and preaching around Afghanistan. Then we heard nothing. Sometime later, I was told: “Your father died because he was an unbeliever. If you want to follow him, your story will end the same way”.

To support the family, my older brother and I worked night shift in a factory. One day, my brother never came home after work and for three years we had no idea what had happened to him. His bus had been stopped by police, and he together with all the other illegal immigrants had been arrested and offered two choices: go to jail for 15 years followed by deportation or fight in the army in Syria, after which he was promised documentation which would allow him to stay in Iran. My brother chose the second option. 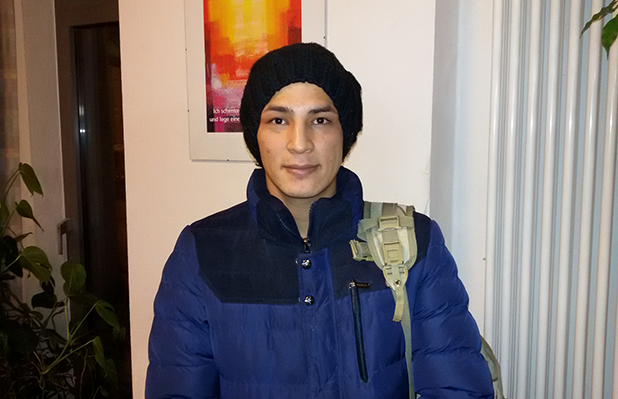 Soon after his military service was over, the police offered the same deal to my younger brother and me and we also both fought in Syria. I served six months before I was shot in the left arm and leg and ended up in hospital. Meanwhile, my younger brother was beheaded. When they sent his body back to Iran for burial, my mother told us to go to Europe: “I have lost one son, I can’t bear to lose any more. We will join you later.” None of us ever received the residency papers we had been promised.

So at the beginning of 2016, still wearing bandages on my wounds, I left Iran behind for Europe, hoping that my brother would come shortly afterwards. When I arrived in Germany… I wanted to find out about my father’s religion but couldn’t find any Farsi speakers who could help me. Then one night late last year, a bus came by and picked up a group of us from the home in Germering and brought us to a church… where we were showed the Jesus film. Afterwards, I met Tom Giebel (ministers to refugees at the church), who invited me to the Farsi Bible study at the FEGMM [Free Evangelical Community church, Munich] and I have been coming ever since.

I now understand what my father believed and have decided to follow Jesus: it is the summer of my life! I believe in Jesus, the Son of God, who died on the cross for my sins. For so long I was searching and did not find. Then these people came to our home, invited me to this group and showed me the way – it was a miracle! I am so thankful to Jesus and God.

Since coming to Germany I have had no contact with my family. My mobile was stolen shortly after my arrival in Germany and I lost all my contacts. I heard that my brother made it to Europe but have not seen or heard from him again.

Also, shortly after I left Iran, police came to the door or my mother’s house and told her that she and my sister must sell up and leave at once. I don’t know where they are now. This is very difficult for me. But Jesus helps me.