This second week, we’ve really found our feet in Delhi. We’ve got some wheels (more about that later) we know our way around, we haggle for 20 minutes over 10 rupees. It’s all become normal - the noise, the stares, the pollution, the hectic pace and the constant stream of Hindi that mostly goes over our heads. We are progressing with our local dialect, some local boys have helped us out with the swear words so we know when people are abusing us.  Our most frequently used words are:
- Namaste hello/goodbye
- Shanti - peace
- Kitneh paiseh? - How much
- Kum! (looking disinterested and repeatedly lowering hand) lower the price
- Jesu bajata hai! - Jesus saves!

People are amazed when we say we’ve only been here 10 days. J-lo went down for a couple of days with flu, Nato had a go at mothering but J wasn’t that impressed with his effort. Everything is sweet again now, we’re on track and fixing to move on soon. 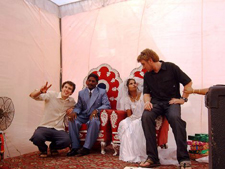 Last Sunday we got a taste of some real Indian culture. We were on the guest list for a wedding reception for a couple that had got hooked up the weekend before. The reception was in a make shift tent on a poor area of town out west, it was pushing 40 degrees in the tent and with no ventilation we struggled to last until the end. Once the kids at the wedding got over the fear of ‘the foreigners’ we were mobbed, and they all begged to have their photo taken repeatedly.

We found marriages are generally done a little different over here, boy meets girl, girl meets boy with a little help from their parents + the church elders. It seems in most cases that the concerned parties get the final nod. It’s not completely arranged, but more ‘suggested’ - Must admit, there seems a certain level of ease in this. Pastor George said he could organsise some prospective brides for us if we would like, we politely declined… Put one up for the new couple as they commit their lives to the service of the Lord with YWAM in India. 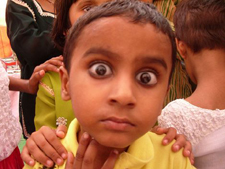 The boy with the pet monkey…
Moved out of the catholic social institute we were staying in and into Pastor George’s unit for the rest of the week. As we were moving out we gave away a couple of moto mags to a lad- he was keen to show us something in return. Rushing off he came back with a monkey, j-lo wasn’t ready for a bout of rabies but the monkey would shake hands and pat your head and even give you a kiss.
Heaps of kids are interested in what we are up to here (including the one with inquisitive eyes in the pic) It’s a good chance to have a muck around and use our limited Hindi to tell them about the good Lord. Try this one on - Jesu ke berame janta hai kya? Do you know Jesus? (very rough on the Hindi side) 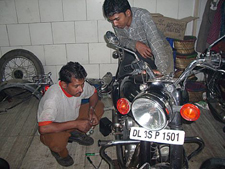 After 3 days of serious bargaining in Karol Bagh, we’d become well known in the neighbourhood, all the motorbike dealers knew us by name, we rode about 15 bikes, kicked 100 tyres and drank 10 bottles of free refreshments and ate 4 packets of complimentary chips. A deal was sealed on a 2003 Bullet 350 Electra, the Electra model doesn’t need a battery to start which we saw as a benefit. For this machine we paid the princley sum of Rs 36,000 or around AUD $1000.

Machines seem to ages quite rapidly over here and this bike, even though it’s a 2003 model has plenty of idiosyncracies. The right indicator only works sporadically, along with the horn, brake lights and speedo. It does start really easily though, runs along great and the left indicator never lets us down. The Enfield’s main problem other than its temperamental electricals is the front drum brake. This bit of archaic technology gives it the stopping prowess of a Ford Festiva towing a caravan. Nevertheless it has these things front and back so we think they’ll suffice when we call on them to do their job.

Riding around Delhi is hectic - one NZ missionary likened the traffic to a school of fish - with no seeming order or rule yet flowing along without bumping into one another… Nath hasn’t been so lucky, the hit count stands at six, three cars, one motorbike, one scooter and one biycle - only small bumps…

Tomorrow we ride for Kashmir, toward the cooler mountain weather and the hotter political climate. We are delivering some supplies for earthquake relief in Shrinagar to an organisation that is working on rehousing the people displaced by the earthquake. So the Enfield will be saddled with us two, our gear and 60kg of equipment to help the relief effort in the far north. We want to stay and help out for some time too, but we have been informed the army are not encouraging foreigners to stay in the area due to the ‘sensitive nature’ of the location. The number of people left dead, displaced or injured after the earthquake is just massive, this was not going to be part of our trip, but we feel if we are able to be useful, we must, to be Christ-like in attitude to people in need.

Pray for us as we head off up north. Pray especially for the people who have lost their homes and families in the disaster. The winter is coming and the death toll will surely rise dramatically as people take shelter from a bitter Himalayan winter that is quickly apporaching.

Blog 3 - Highway Love
The good Lord has definitely been with us this week. After a close call - almost signing up with a militant Hindu group masquerading as an aid organisation - we hit the road to Kashmir. It was a 2-3 day ride that turned into a 5 day epic. Our contact in Shrinagar (capital of Kashmir) was a brother known as ‘Titus’.
The Road North
If we thought the roads in Delhi were hectic we were in for a surprise when we hit the ‘highway’ north. This was the scariest drving experience of our lives - the only rule is the biggest vehicle, with the loudest horn wins. The vehicles on the highway range from mule + cart going at walking pace to TATA trucks driving at 100+km/h. Throw in overloaded cars, motobikes, people walking, tractors, rickshaws even elephants; it’s a wild place to be.  The good Lord has definitely been looking after us on the road especially the mountain passes of Jammu + Kashmir where three wide around blind corners is the norm. In India you are expected to get out of the way of oncoming cars that are overtaking, if this means careering of the road, then so be it.
At Home With the Sikhs

The trip to Kashmir took a bit longer than we thought. It’s only 850km but it took us five days, the roads are as mentioned pretty crazy and it’s difficult to maintain any kind of decent speed even on main highways (and yes we use the term highway loosely). Other more pleasant things halted our progress like a chance encounter with some Sikhs (religion - turban wearers - gurus…) Firstly we met the teenage boys outside a hotel as we were observing another man been unceremoniously booted from a Sikh party inside. They told us they attended the local Catholic School that was having a fete today so we promptly set off to check it out. At the fete we took the opportunity to enquire of the principal (a very regal looking nun) if we could crash at the school for the night. This was met with a rather frosty reception so we made for the gate. In the process of leaving one of the boys suggested we stay at their house - sounded good. 24hrs later after being shown some of the best hospitality known and meeting every family member in the district we were sent on our way with warm goodbyes and the promise we would come again soon.
Titus and his Tent (shelter)

The tragedy of the earthquakes was not only in the event itself but now is unfolding due to the millions of people without shelter from the quickly approaching Himalayan winter. Every day that goes by the temperature is dropping and it is thought that if people aren’t sheltered soon the casualties from the winter will far outstrip those from the earthquake itself.

After escaping the clutches of the militant Hindus we were all to happy to comply with our new contact, a fellow believer known only to us as Titus. He had asked us to bring supplies from Delhi to assist him in the construction of shelters for these displaced people. Nathan negotiated with the local merchants and secured 500m of 3/4” metal strapping + 1000 clips and a strapping machine to aid in the construction of these shelters. We loaded up the bike, us two and about 80 kg of luggage and headed off for Kashmir. When we arrived in Shrinagar- a stunningly beautiful place- were met by the man himself, a gentle giant of a man.

Titus who took us into his home where we were treated like family by his lovely wife, in her true Southern American style. Titus told us the idea had come from above and he was just the messenger. The idea is simplicity itself, 4 half-round pipes, some metal stakes, 9 sheets of corrugated iron and some plastic insulation. Cheap, quick and easy to build, currently we are helping him sell the concept to the NGOs who are looking for way of sheltering so many people quickly. Already they have started constrcuting these shelters in Pakistan. We are proud to be helping a man so ingenious yet so humble.
Catch you on the flipside of a week
nb + jp