The theological explanation for the mental health issues facing our youth 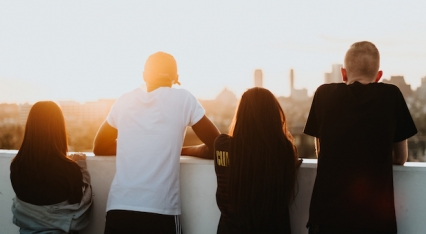 Young people in Australia are experiencing mental health issues at an alarming rate. The incidence of depression, anxiety, eating disorders and other psychological disorders are getting worse, not better. This is occurring, notwithstanding the best endeavours of parents, psychologists, school authorities and governments to the contrary.

Over the past decade, never have we done more to develop resilience in young people – and never had we had more young people with fragile resilience.

Part of the reason why our young people are struggling more is because our society has abandoned the foundations of a Christian heritage – a Christian metanarrative – that makes sense of ourselves and the world around us.

"our society has abandoned the foundations of a Christian heritage"

We have “freed ourselves” from the constraints of God without realising the implications, like sawing off a branch you are sitting on. For most of the past 2000 years, society has been building on Judaeo-Christian foundations, but when those foundations are abandoned, it's inevitable that society will break.

But society doesn't break immediately. We are a cut flower culture – the moment you cut a rose from the bush, it begins to die, but the decay is not obvious for some time.

For a generation or two, the shared values of Australian society continued to be shaped by the memory of that Christian metanarrative, even if most people had little or no Christian faith themselves. But with each successive generation, the memory becomes paler and paler. The consequences of this lost memory are manifesting in the current generation of young people.

The foundations we have abandoned

There are three key foundations to a Christian understanding of the human person (a Christian anthropology).

First, we are made in God’s image, which means that each human being has intrinsic worth, regardless of ability, race, sex, status etc. God has made us in wonderful diversity, and each of us is the way that God made us. This foundation teaches a child that God made them and loves them, just for who they are.

"We are made in God's image"

Second, we are rational, volitional and accountable creatures. We are able to make choices and make a difference, and with that comes the responsibility for the choices we make. This foundation teaches a child that there is right and wrong, and that our choices matter.

Thirdly, we are flawed but forgivable. Not one of us is perfect – we are all flawed – but God knows this and, because of God’s unconditional love for his creatures, he has provided the way for us to be forgiven through Jesus. This foundation teaches a child that their failures are forgivable, and that they need to ask for forgiveness when they do the wrong thing.

We are flawed but forgivable

Our society has replaced these three foundations with counterfeits.

Instead of teaching children that God made them just as they are – made in his image and precious to him – we teach them that human beings are self-made. They can be “whoever you want to be”, even to the point of choosing their own gender. We artificially prop up their self-image – everybody always wins a prize; every child is exceptional – but the illusion can only be maintained for so long.

The fact is, some kids always win the running race, while some – like me – always come in last. Eventually, dissatisfaction with the “self-made” me sets in – a profound crisis of identity.

Instead of teaching children about right and wrong, parents let them have moral autonomy. Each individual becomes the arbiter of right and wrong; the ultimate moral judge: “no one has the right to tell me that I am in the wrong”. This now manifests as a moral autonomy, even about facts and opinions. No one has the right to contradict the options (including opinions about facts) of others.

When a child discovers that, despite their best efforts, they are not intrinsically good – when they do “bad” things that need to be forgiven – what can they do?  Our children have no way to come to terms with, and come back from the brink of, their own moral failure.

Strident voices claim that Christianity is harmful for kids. But the reverse is true. When we cut ourselves adrift from Jesus, our kids drift aimlessly with no anchor for the soul. Kids need to know that they are loved and valued for who they are, that they need to look outside themselves for a moral compass, and that failure is not final: forgiveness is possible.

Jesus provides all this and more – Jesus is good for young people.