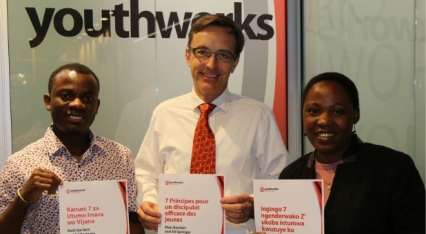 Christians are used to seeing God at work

Christians are used to what others may call coincidences as they see God at work through networks of believers. But sometimes, a string of “coincidences” turn out to be a stunning display of God’s providence.

Such was the case when Youthworks CEO, the Rev Craig Roberts, got an email from the president of the Baptist Union of Burundi, Pastor Jean Jacques Masabo. Burundi is an East African nation, formerly a German and Belgian colony, bordered by Rwanda and Tanzania.

“Over Skype, Jean Jacques explained to me churches in Burundi are overflowing with young people,” Mr Roberts says. “But because of the ravages of civil war and the AIDS epidemic, there are very few mature Christians. He was concerned that young people are not putting down deep roots in the gospel, so his church will be ‘a mile wide and an inch deep’.”

Mr Roberts immediately decided that Youthworks would provide churches in Burundi with free ministry resources, and Pastor Masabo replied, “Brother Craig, that is very generous! Are these resources only available in English?”

There was silence for a few moments, Mr Roberts says, “then I said, ‘What language would you like them to be in?’ He said, ‘Kirundi is the language of the children. Swahili is also good. We could get by with French.’ I said, ‘No worries, mate!’ – not having a clue how Youthworks could do this.”

It was then that the series of coincidences led to Sydney Anglicans partnering with this struggling African church to produce a translation in three different languages.

“A few days later, I had a meeting with [the Rev] Naomi Ireland, the family and children’s minister at St Matthew’s, Manly,” Mr Roberts recalls. He jokingly asked her, “I don’t suppose you speak Kirundi?... but quick as a flash, Naomi came back with, ‘You mean the language of Burundi?’

“So, four days after I’d promised to help Jean Jacques, I was on the phone to ‘Burundi Dave’ – St Matthew’s music minister, David Nduwimana.”

Mr Nduwimana was almost in tears at the thought of helping translate Youthworks’ signature youth ministry resource into his heart language. “I was really excited when I heard about this project to help youth in Burundi,” he says. “I thought, ‘Yeah, this is the new generation. The country is still young. This is my opportunity to help them understand and follow Jesus. We need to make this happen’.”

"This is my opportunity to help them understand and follow Jesus"

The final piece of the puzzle came when Mr Roberts shared the story so far during a service at Life Anglican Church at Quakers Hill.

“I was interviewed up the front and asked to share something exciting happening at Youthworks,” he says. “I told the story of Jean Jacques and ‘Burundi Dave’. The senior minister, [the Rev] Geoff Bates, cut me off and said, ‘After church, you’ve got to meet that lady!’ and pointed to Eugénie Kathihabwa up the back of the church with her husband and children. Eugénie told me she had worked for the Burundi Department of Education, where her job was translating educational resources from English to Kirundi! “So, in God’s magnificent providence, within a couple of weeks, he’d led me to two Burundian Christians in Sydney Anglican churches who were fluent in Kirundi, Swahili and French.”

The rest, Youthworks hopes, will be history. Both Mr Nduwimana and Mrs Kathihabwa have eagerly worked on translating Youthworks’ resource – 7 Principles of Effective Youth Discipleship – into three languages, so it can be made available for free to the churches of Africa, potentially impacting at least 150 million youth and children.

“Because of the political issues, young people in Burundi are stuck,” Mr Nduwimana says. “They often get drawn into things to help them forget their situation like drugs, alcohol or joining rebel groups. Churches don’t have the resources to help.

“For me, the translation was like writing a song. When I sent my Swahili translation to Eugénie, I wasn’t sure what she was going to think about it. When she sent me a message saying, ‘Man, I like it. I don’t have so much to change in this’, I was like, ‘Yesssss!’ That was really encouraging.”

For Mrs Kathihabwa, too, it was rewarding work. “When Craig Roberts was talking about Youthworks at church and he mentioned Burundi, I was so surprised that there is something which is happening in my country from here in Australia,” she says. “I couldn’t believe my ears!”

The new resource will be launched this year in Africa.

“For the people reading the resource, I would encourage them to take into consideration all the ideas in order to keep young people in the church, so they can grow in the faith,” Mrs Kathihabwa says. “This is a great thing.

“I want to say to people reading Southern Cross, keep praying and helping to work with young people and youth to help them grow in the faith. Because if the youth of a community or a country are believers, that country will be safe. We have a brilliant future.”