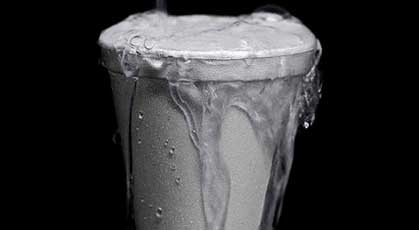 Thursday March 22 is World Water Day and I am looking for a miracle.

I was talking to a sceptic recently who was hell-bent on bringing Christianity down. Through clenched teeth, he argued that if there was a God, she wouldn’t do anything that defied the laws of physics. When I said I thought the resurrection of Jesus was in pretty stark defiance of such laws he could barely contain his sense of outrage. The spellbinding stare-down was only broken by my gentle smile.

A friend of mine, when preaching on this miracle, called it Jesus’ ‘fun’ miracle. I heard him ask, on more than one occasion, whether we would rather Jesus walk across a back-yard swimming pool, or turn the contents of the swimming pool into the best wine money could buy. He was always for the latter, and sometimes attracted the annoyance of his contemporaries for the extravagant way he talked up the lavish miracle.

I’m not so sure that it was just a ‘fun’ miracle. In a shame culture, here was a family in dire straights. As festivities rolled along, they had run out of wine. They had no cell phone to rectify the situation with a quick home-delivery order. Not even a late-hours bottle store down on the corner to save the situation.

But, today, it’s not more wine that is needed. Not only is there an oversupply in the world market, a glut in the Gris if you wish, but  also an over-indulgence among the world’s consumers.

Today, in many parts of the world, it is not wine that is needed but water.

I was recently told a story about a pub in or near Cape Town, where water storage is critically low, and people are talking about marshall law if solid rain doesn’t arrive soon. The pub discovered an aquifer beneath its cellar and it was planning for the time when its water would be in greater demand than its beer.

I don’t know whether the story was a bit far-fetched (about the pub, the water shortage is real), but not as far-fetched as the distances many people walk to fetch some water.

Funny too, in an ironic sort of way, that Cape Town and its regional areas, are home to some of the most famous wines in the world. There may yet be parity between a bottle of water and a bottle of South Africa’s best wine.

But here is my question.

If Jesus could turn water into wine to help out a poor rural family who had undersupplied, could he not turn wine into water to meet the needs of communities in serious water stress? And you know I just don’t mean first-world city dams that supply water to the multiplicity of city taps and cisterns in our homes and holiday cottages.

If Jesus, the water-maker, the master baker and the one who can put a coin in a cod’s mouth, could turn water into wine (John 2), bread into a bakery (John 6) and even a fruitless night of fishing into the biggest fish-fry breakfast on record (John 21), why doesn’t he do it in reverse?

Come to think of it, I have seen it done. Through the kindness and generosity of Anglican Aid donors, I have seen water tanks installed at the brick kiln sites on the outskirts of Lahore in Pakistan. Indentured slaves can now, at least, refresh themselves as they engage in the hard labour of brick-making in some of the most appalling conditions I have ever seen people living and working in anywhere in the world.

And I have also seen some of these same people receive the rare gift of a small sack of flour, joyfully returning from church like it was Christmas Day, eager to cook a simple flat-bread feast.

While in Fiji, cyclone ravaged communities, whose fishing boats were destroyed, through the generosity of donors, have new fishing boats, are back in the water and hauling in catches for their families and communities.

Is this the way that God, who can forgive sin, calm storms, heal disease, multiply bread and fish, raise the dead and even turn water into award-winning wine, has chosen to meet the needs of those in water stress today?

Is not this the kind of fasting I have chosen:

Is it not to share your food with the hungry

and to provide the poor wanderer with shelter . . . .

Jesus’ outrageous miracle of turning water into wine, whether a fun miracle or not, showed his glory and showered his grace. Why don’t we try something outrageous too, by turning some wine into water? For Anglican Aid’s Water Works For A Thirsty World in March, we could:

•  Donate the cost of a premium ($100), or even a clean-skin ($10), bottle of wine to provide safe clean drinking water for many communities that Anglican Aid partner with.

•  Want to do something more outrageous? I saw a cheap bottle of Grange Hermitage at the airport the other day for $850. That would make a wonderful gift of water to those who need it.

•  Or how about donating the amount of your latest water bill for the cause? Or $10 for every tap at home? Or the cost of your swimming pool chemicals for a month? Or drink only water for a day and make a donation for the privilege of quaffing a premium Warragamba White?

Wine into water? We can do it!