Using my tumour for God 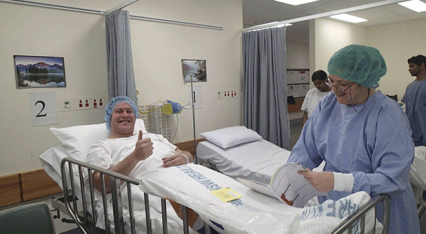 I have only wanted two things in life: to help and serve people and to become a pilot. I thought my best chance of fulfilling both of these things was to become a search and rescue pilot. At age 18 I joined the Army.

It was while I was studying at ADFA [the Australian Defence Force Academy] that I went to my first church service on my own volition. It wasn’t until I joined the Fellowship of Christian Uni Students that I realised I needed to decide whether to trust in Jesus or not. The biggest stumbling block for me was science and faith. Once that was cleared up, nothing was preventing me from trusting in Jesus, so I did.

I graduated and was about to start basic flight training school when I began struggling with depression and anxiety. My psychologist referred me to a psychiatrist, who sent me for an MRI. When my doctor, who usually stands up, said “Zack, grab a seat,” I knew there was something wrong.

He just said, “You have a brain tumour.” My first thought was “Here we go again”, because my cousin had just died of cancer a month earlier. Looking after my parents was my primary concern.

I knew that whether I died or not, I would be with Jesus in paradise, so I wasn’t worried about me.

About a month later, after many tests, I started thinking, “This is really hard. I would much rather be with Jesus, why am I still here?” Through months of thinking through that, I got to a point where I recognised God has given me this tumour for a reason, so how do I use it for the growth of his kingdom? How do I glorify God through this tumour? It is through using my story and encouraging people to know and love God.

Initially flying was my number one goal, and chaplaincy was number two. Once I was told I couldn’t fly, I knew that God wanted me to become a chaplain. I was so focused on becoming a pilot that nothing was going to stop me – unless something physically stopped me being able to fly, which God did. I’m very thankful for that.

I know God made us. He knows how we work and he knows what’s good for us and bad for us. This tumour is a sign of grace, because it stopped me from going down another path. God had a better plan for me to do ministry and I was too blind to see it. Becoming a pilot had become an idol.

My life mission now is growing God’s kingdom: I am becoming a hospital chaplain, a minister in a church or another job where I get to love God and love my neighbour. I am now studying at Moore College to be trained as a hospital chaplain.

Having lived in a hospital for three months and having to talk about my tumour has showed me good ways to support others. It excites me that I can go into a place where people are struggling and love them. I wouldn’t wish this tumour on anyone, but I’m thankful that God gave it to me. I’m going to use my story and the continuing story until I die to point people to God.

The biggest thing I want people to know is that Jesus is Lord, and the only way to God is through him. We are not king of our own lives. It’s so hard looking around this world and seeing that most of the world is going to be dead because they reject Jesus.

If I can play any part in building up God’s kingdom, I will count that as a successful life. For me, the measure of a good life isn’t what cards have been dealt, it’s how we play them. And playing them for God’s glory is the only way to truly play them. God gave me this brain tumour, and I think the best way to spend my last eight years of life is by serving Jesus.

One day I’ll be too sick to be a paid hospital chaplain. I’ll still be in the hospital loving and caring for the patients around me, and for the nurses and doctors who are stressed. While I physically might not be able to walk around the wards chatting to everyone, that won’t change the fact that I can still love people and care for them and point them to God.

Zack Hankin is studying at Moore College and attends St Luke’s, Miranda. Continue following Zack’s story you can sign up for updates and prayer points.