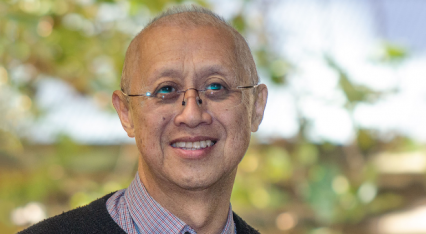 This is the second article in a series on cancer and Christ. You can read the first article here. In this article, Ivan's wife Virginia shares what it has been like to support her husband.

Virginia is living with two things in tension

First, tremendous sadness about her husband’s “terrible disease” and the loss of things they had expected to share – such as growing old together. And second, despite recognition that “this is deeply sad and deeply wrong… the underlying knowledge that it’ll be okay because God’s in this, he’s going to work out his purpose. It could be tough, it’ll be heartbreaking, but in the end we’ll be okay”.

One issue they’ve had to grapple with from the outset is that Lee’s illness has happened so much in the public eye.

“We were in the hospital with the diagnosis, it had just happened, and then we’re ringing the Archbishop, we’re having to let everybody know and Ivan is emailing Kirsty, his PA, organising backup bishops for all his appointments from his hospital bed,” Virginia Lee recalls. “There was a sense where you wish you had a minute to deal with it on your own.

“After his diagnosis there was the question, ‘Would he even come out of hospital?’ Since then we’ve had three more years that we imagined we might never have had”.

The support of the Church

“The flipside has been the enormous amount of support we’ve received, and to know that many people have been praying. At times, when you can’t do it for yourselves, there are other people there holding you up by their prayers… people we don’t even know who have taken time to write us a note or send us an email or contact us. You feel totally unworthy in that sense, but it’s been a lovely blessing to have that sort of support and care.”

“The other day he was nauseous, eating a dry cracker and saying, ‘I must be pregnant!’” And I thought, ‘Yeh, that’s how you do it’. Whenever you’re in a conversation with him there are always laughs and genuineness – there’s no pretence. And there are a lot of people who relate to that.”

Some days are difficult, as she watches her “Energiser Bunny” husband struggle with a fatigue that never held him back before – as well as the knowledge of what will eventually come.

But, she says, “We’re not the only ones going through this. There are people every day who are getting these diagnoses.

“We all pretend we’re not going to die… but it’s a reality that’s not only sobering, it makes you want to make the most of life, to look around every day, see the good things and, as the psalmist does, give thanks to God for everything. His love continues to hold you up. And that undergirding truth, which just warms my soul, is that God is good and that this will be okay.

"God's love is enough to cover everything"