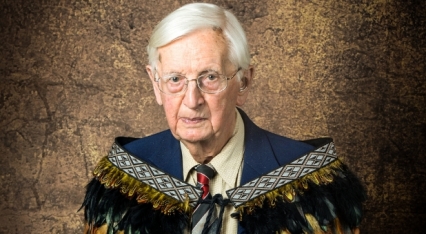 A World War II veteran, history professor and valued Sydney evangelical has been honoured with an AM in the Queen’s birthday honours list. Dr Bruce Harris was made a Member of the Order of Australia “for significant service to higher education, to veterans and to the community”.

Aged 99, Dr Harris was born in New Zealand into a family of strong faith and, after the war, was a Rhodes Scholar at Oxford. While in the UK he befriended the likes of J.I. Packer, Donald Robinson, F.F. Bruce and Alan Cole and, like them, contributed to much-needed evangelical publications such as the IVP Bible Dictionary. It was also at this time that he met and married his wife Pamela – and they recently celebrated their 70th wedding anniversary.

He was involved in the Department of Classics at Auckland University, as well as the Bible College of New Zealand and Intervarsity Fellowship, before moving to Sydney in 1970.

Dr Harris’s youngest son, Adelaide missioner Bishop Tim Harris, says that on arrival his father joined a local Anglican parish and “very quickly became a member of Synod, Standing Committee and groups like the New Universities Christian Colleges… he was on the steering group that supported the establishment of Robert Menzies College [at Macquarie University] and New College [at the University of NSW]”.

His father was chairman of the Diocesan Education Commission for five years in the 1980s, integral to the creation of the Evangelical Anglicanism report commissioned by Synod in 1990, and was also a lay Canon of St Andrew’s Cathedral.

In his day-to-day work, Dr Harris was one of the first lecturers in Ancient History at Macquarie University and is a former associate professor and head of its School of History, Philosophy and Politics.

In recent years he was “adopted” by the Maori veterans in NSW because one of his postings during the war was as a liaison officer with a Maori regiment. Dr Harris has regularly attended events with the veterans and spoken of his faith amid the turmoil of war. And they have honoured Dr Harris with the gift of a feather cloak or Korowai as a sign of their respect for him.

Says Bishop Harris: “On his 98th birthday they turned up at the nursing home and sang him the songs of respect for a Maori elder.

“Dad’s probably one of the last survivors of his generation – that’s why we’re quite excited to tell the story of what the present generation has inherited because of his… providing the first resources that evangelicals could use, [and] providing pathways for further study.

“He always wore his learning very lightly and won respect for who he is as a Christian gentleman. He’s a very humble man and a great encourager in faith. In our family, my parents’ witness – and Dad’s example of faith in that space as a public intellectual – has been a very significant legacy down the generations.”