Youth Revival: The impact of the 1959 Billy Graham Crusade on young people 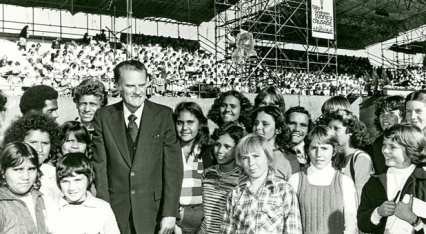 Dad was not the only young person whose life was transformed that day. In fact, a statistical analysis of the Sydney Crusade demonstrates that 60% of those who signed the decision card were under the age of 21.  The age most highly represented was 12-15 years at 28%, followed by 16-21 years at 19%. Many call the 1959 Billy Graham Crusade a revival, but it was not only a revival, it was a youth revival.

Apart from the work of the Spirit, why did the Crusade have such a marked impact upon youth? Graham’s message was a traditional gospel message of the sinfulness of people and their need for forgiveness through the death and resurrection of Jesus. This was not new.

What was new was the way it was communicated and Graham’s focus on young people. Youth nights were organised which were full of energy and infectious enthusiasm and were perhaps the most fruitful of the Crusade meetings.  Associate evangelists spent hours at secondary schools, speaking at assemblies and lunch hour meetings. Graham spoke at Sydney University outside the Great Hall to a crowd of 4,000 students. Even at the main Crusade meetings, Graham would address young people separately and call them to dedicate themselves to Christ.

Graham knew how to communicate to young people. He had had learnt his craft speaking at large Youth For Christ rallies across the US in the 1940s. Graham empathised with young people and their ‘problems’ and he addressed issues like: broken families, alcohol, sex and fear of atomic war. In one youth meeting he explained that adolescence is the hardest stage of life when a young person is making life decisions and their body is maturing. He tried to communicate that he understood youth culture. ‘Teenagers have a language and a style and a philosophy of their own. In the United States, to the teenager, grown-ups are ‘squares’ because they can’t “dig the jive”’ . He reassured teenagers that though adults didn’t understand them, they were created by God and understood by him. He called young people to give their life to Christ, to live a more challenging, but also more joyful life.

The other new element was the focus on making a ‘decision for Christ’. Like my Dad, two-thirds of those who signed the decision card went to church or some kind of youth ministry before the Crusade.  There was a fertile ground for revival, cultivated by the instruction that young people had received in their churches, Sunday Schools, fellowships and schools. They were taught about a creator God and their accountability to him. So that when Graham spoke of the need for repentance and offer of forgiveness, many responded. What was needed was a challenge to the will, to make a decision for Christ. Graham called on young people to give their life to Christ tonight, to have and encounter with Christ that would change their life.

The Crusade also had a significant impact on young people because of the encouragement to consider their future. At the main meetings, youth were called not just to accept Christ, but there was also a separate appeal to witness and dedication. Many young people, like my Dad, dedicated themselves to full-time gospel ministry. Some enrolled in church ministry or missionary service, people like Peter Jensen, Philip Jensen and Bruce Ballantine Jones, just to mention a few prominent Anglicans. The numbers at Bible Colleges increased, 44 men enrolled at Moore College in 1960, the largest intake to date. At Deaconess House, the female candidates had all either been converted at, or participated in the Crusade. At missionary societies, such as CMS, many of the candidates were converted at the Crusade.

Our context today is of course very different. Our society is post-Christian. Parents do not send children in droves to Sunday School and youth ministries like they used to. And if we say ‘the Bible says’ the way Graham did, people won’t respect our words in the same way. It has become more important to communicate the gospel in a way that young people understand, engaging with their context and the problems they face. We also need to keep calling on those within our orbit at Christian schools and church youth groups to make a ‘decision for Christ’. In Anglican churches in Sydney, the majority of church members still become Christians before the age of 20.  Finally, we need to nurture disciple-making disciples as Graham did. Young people who not only believe the gospel, but are dedicated to a life of service.

My Dad made a decision for Christ at the Crusade, but Graham had also challenged him to think about future service. A year later, Dad dropped out of his Science degree and signed up to study at Moore College. After that, he was an Anglican minister in Sydney for 50 years. Like many of the young people who made a ‘decision for Christ’ in 1959, he lived a more challenging, but a more joyful life, thanks to the preaching of Billy Graham.

Ruth Lukabyo teaches Church History at Youthworks College and will speak at the International Association of Youth Ministry conference in Melbourne April 19-21. ‘The 1959 Billy Graham Crusade as Youth Revival’.

Bellamy, John et. al. (2013) ‘Becoming a Christian: A report from the 2011 National Church Life Survey for the Anglican Diocese of Sydney’, [url=http://www.effectiveministry.org/wp-content/uploads/2015/05/Youthworks-Becoming-a-Christian.pdf]http://www.effectiveministry.org/wp-content/uploads/2015/05/Youthworks-Becoming-a-Christian.pdf[/url]