Cathedral gears up for Archbishop farewell 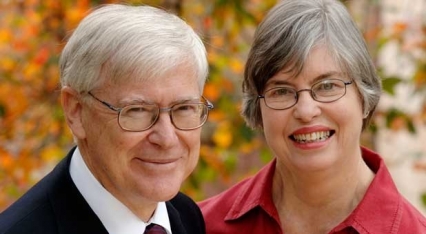 Archbishop Peter Jensen and Mrs Christine Jensen will be officially farewelled at a large service at St Andrew's Cathedral on Friday night, 14th of June.

Dignitaries such as the Premier, Barry O'Farrell and the Governor, Professor Marie Bashir, will be in attendance as the diocese pays tribute to Dr Jensen and gives thanks for his 12 years as Archbishop.

Invitations went to every parish in Sydney and overseas visitors will also be in attendance.

The Archbishop will preach from 1 Corinthians 1 'We preach Christ crucified' and the service will be livestreamed on the Internet and available for playback on demand later.

Dr Jensen will retire on his 70th birthday in July and a Synod to choose a new archbishop will be held in August.

The Anglican Church League has organised a series of meetings to pray for the selection of a new Archbishop.

The meetings began on June 10th and will continue until June 20th.

"The election of the Archbishop will have a profound impact on the future of our diocese. Although it is a decision made by humans, we pray that we will honour God in the process and outcome. We pray that the man chosen by the Synod will be an instrument of God's mercy on our diocese, our city and beyond." said ACL President Gav Poole.

"The ACL plays a key role in most diocesan elections and its role in this one is simply to encourage prayer. We encourage all synod members and church members to join us for one of the meetings as we pray for the election of a new Archbishop"

The final gathering will be at St Andrew's Cathedral. Full details of all prayer meetings are at the ACL website.