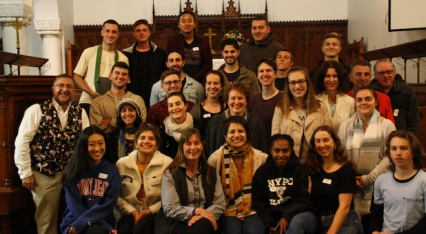 Synod celebrated the work of the gospel in the Georges River Region on day two of its session last month, when representatives of Bayside and Fairfield with Bossley Park spoke of their request to be returned to full parish status. And, despite being at either end of the region, the parishes share a similar story.

By God’s grace, each parish has grown since the 2000s

Both flourished in the 1950s and 1960s: attendance was booming and the churches were well connected with their respective communities. However, when cultural and other demographics changed rapidly this led to a decline until Bayside (formerly St David’s, Arncliffe) and Fairfield with Bossley Park were unable to support a minister and became provisional parishes.

Synod members heard how each parish has worked hard since the early 2000s to revitalise ministries, and by God’s grace had done this well.

Bayside has grown in recent years - not due to Anglicans moving into the area, as only 800 people identified as Anglican in the 2016 Census, but rather due to the parish’s successful evangelism to its multicultural community.

“We can’t reach everyone,” said the rector of Bayside the Rev Zac Veron, “but we can reach some, in affinity groups.

"We can't reach everyone"

“In heaven, we will all be worshipping together. There will not be ethnic barriers then. But this side of heaven we understand that the Lord has shaped most people groups differently, so we target some, and work particularly with them, without pretending that we can reach everyone in our area."

Additionally, the recent creation of a third congregation focusing on young adults and has not only had the positive effect of many youth proactively pursuing their faith for themselves, but is also raising up potential church leaders for the future.

“It’s been wonderful to watch these young people step out of their parents’ shadows and take ownership of their own congregation. They’ve matured spiritually,” Mr Veron said. Bayside hopes to become a training centre and would love your prayers that the Lord will support it in its mission to keep sowing the gospel.

Four congregations united by the gospel

God has similarly been at work in the multicultural community of Fairfield with Bossley Park. The parish has been consistently able to reach into its community and preach the gospel in an area where, by the late 1990s, 87 per cent of people were from a non-English speaking background, many refugees and asylum seekers, and range of social problems. Fairfield and Bossley Park merged in 2007.

“God, in his kindness, continues to grow ministry at both Fairfield and Bossley Park,” rector the Rev Stephen Shead told the Synod.

“Today we have four congregations, which are all very different from one another – unique mixes of ethnic and social backgrounds, but with a large core of people who have a heart to serve Christ and continue sharing the hope we have in him. We have youth groups an children’s ministries at both sites, many mid-week small groups, and manty other ministries to connect with the community or two grow God’s people in maturity.”

Mr Shead added that members were “immensely thankful to God” for those who had laboured in ministry in the parish over many decades, particularly Bishop Peter Lin, who was rector for 14 years. He also expressed gratitude and thanks to the congregations of St Stephen’s, Normanhurst and St Clement’s Mosman for their financial support, encouragement and prayer for the past 20 years.

He asked for Synod members to pray for the parish as it sought to minister to one of the most ethnically diverse areas in Australia. “The nations have come to us and many are completely open to hearing about Christ – if we can only communicate with them,” he says. “The harvest is indeed plentiful.”

"The harvest is indeed plentiful"