“Imagine your local Westfield being stripped”

There’s been a call for urgent prayer for calm and safety amid a developing crisis in South Africa.

Dozens have been killed in days of rioting, looting and lawlessness following the imprisonment of the former president Jacob Zuma.

“Imagine 10,000 people storming your local Westfield and totally destroying it, stripping everything off every shelf of every shop and then setting the whole thing on fire,” Steve Rockwell, from George Whitefield Theological College in Cape Town told Anglican Aid in an urgent message. “But even as I type that … it’s still not the same. It’s very hard to understand and appreciate the desperation of the situation in this country.  Fifty years of apartheid and twenty-five years of corrupt democratic leadership, combine that with COVID deaths and over a year’s worth of constant lockdowns and infrastructure failures and near 50% unemployment – all of it has left the country on its knees.”

Across South Africa, from areas like KwaZulu-Natal province, Zuma’s home area,  to Gauteng province, which encompasses the city of Johannesburg, there have been outbreaks of violence and looting. “People are desperate, and this is the outcome. Zuma’s imprisonment was merely a spark on a veritable forest of dry tinder that has been systemically prepared for ignition over decades, generations even” Mr Rockwell said. 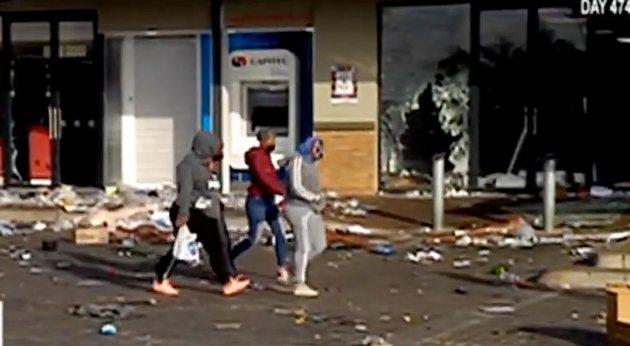 The Archbishop of Sydney’s Anglican Aid also called for prayer and support of the aid projects being hit by the unrest, especially for Umthombo weMpilo, a ministry of Christ Church, Hillbrow that helps women escape sex work.

“Due to the fact that former president Zuma was jailed last week, riots have broken out in different parts of Gauteng,” said Bubbly, a project worker. “In Hillbrow shops are being looted – food trucks are torched and shopping malls are vandalised. It’s not safe to be on the roads at all, so Umthombo is closed for the time being.”

“We are getting many calls by women asking for food – these are hard times as South Africa is also in level 4 lockdown due to many Covid cases.”

South African Broadcasting channel SABC is showing scenes of looted shopping centres (see above). The bodies of 10 people were found in rubble after a stampede at a Soweto shopping mall.

1.
Churches around Sydney pray without ceasing
2.
A prayer for Ukraine
3.
Refugee advocacy bears fruit
4.
A celebration of uncommon leadership