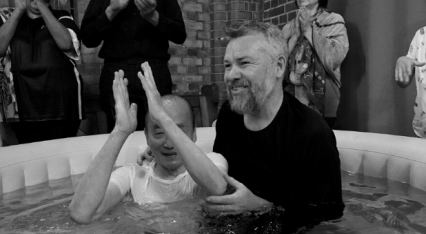 Someone from America, Britain, China, Vietnam and Russia walked into a church… it sounds like the start of a joke but it was actually the start of new life for 10 people baptised recently at South Sydney Anglican Church.

“In Redfern, we often find people when they have absolutely hit rock bottom. We love them and share Jesus with them,” says senior minister, the Rev Matthew Johnson.

“This year, we worked hard on running the Christianity Explored course on a semi-regular basis. I delegated more responsibility to people in the church to run home groups and I spent more time focused on evangelism. So I was constantly inviting people on the fringe of the church to come along to the course.”

The invitees came from a variety of ministry activities run by the church at its Redfern base. “At our Friday night soup kitchen [OzHarvest distribution] we are having more and more Mandarin speakers turn up,” Mr Johnson says. “So we have been doing short gospel presentations every Friday night before the food distribution and inviting people along to Christianity Explored. So seven Chinese people did the course with Mandarin subtitles.

“Three of them decided to become Christians – one from Vietnam and two from mainland China. As a result, we have now started a Mandarin church service on Sundays with 15 people regularly attending.”

"She finished the course saying she now believes in Jesus"

The multicultural nature of the area also drew a Russian-speaking lady named Polin. “Polin was first introduced to Christianity through our Friday night food distribution,” Mr Johnson says. “She wanted to come along and help out, but we explained that to be a volunteer you needed to be a regular member of our church. So Polin said, ‘Okay’, and she started coming to church most weeks.

“At this point, Polin was not yet a Christian. She grew up in Communist Russia with very little knowledge of the Bible. But she started serving on Friday nights and showing a genuine interest in Christianity. So we did Christianity Explored with her, this time Russian subtitles, and she finished the course saying she now believes in Jesus!”

The only non-recent convert was Peter Boyce, a well-loved figure around the churches of inner Sydney, who decided that after more than 30 years as a Christian, he should make the most of this opportunity and get baptised.

“Exactly why he’d never been baptised was a little bit hazy,” Mr Johnson says. “But Peter loves sharing the gospel and getting baptised was a perfect opportunity to invite family and friends to hear the gospel, yet again.”

South Sydney Anglican Church, formerly known as one-one-seven church, has as its vision “A Community overflowing with faith, hope and love in Jesus”. As the tables groaned with a dumpling lunch and the water overflowed from the small baptism pool, the congregation was left rejoicing with 10 new brothers and sisters.