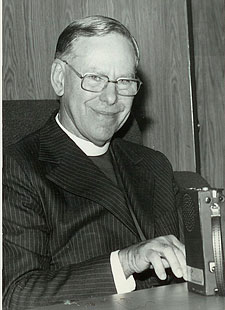 The former Archbishop of Sydney, Sir Marcus Loane, died Tuesday afternoon, April 14 aged 97, after a short illness.
Hailed a "rock" of the church in Sydney and Australia when he celebrated the 50th anniversary of his consecration as bishop last year, Sir Marcus was the first Australian-born Archbishop of Sydney, serving in this role from 1966 to 1982, and was Primate of Australia from 1978 to 1982.
He was knighted in 1976.
Archbishop Peter Jensen has paid tribute to “a remarkable leader who served both church and nation”.

“As the first Australian Archbishop of Sydney and as Primate Sir Marcus was a formative leader in our church,” says Archbishop Jensen (pictured below with former Archbishops of Sydney Sir Marcus Loane, Archbishop Donald Robinson and Archbishop Harry Goodhew).

“In national life, he offered leadership which transcended politics. In particular he spoke up for the poor and helped spark the Henderson enquiry of the early 1970s. He offered distinguished service with our troops in New Guinea during World War II. 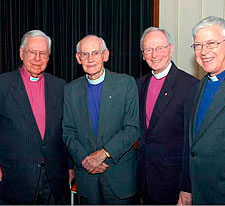 “He was a prolific author with an international influence and ministry.

“But he will be remembered most as one of the key architects of post-war Anglicanism in Sydney.”

Last year, world-famous evangelist the Rev Dr Billy Graham praised Sir Marcus and his wife Lady Patricia as "two great servants of God".
Sir Marcus ministered among theology students and university students at Moore Theological College as vice-principal from 1939 to 1953, and then as principal from 1954 to 1959.
At a thanksgiving service for his 50 years of consecrated ministry in the Sydney Diocese last year, people spoke of his compassion, strength, encouragement, good use of his gifts, and his dedication to overseas mission work.

They had known Sir Marcus as friend, family, bishop, archbishop, primate, historian, theologian, prolific author and scholar of the word of God. 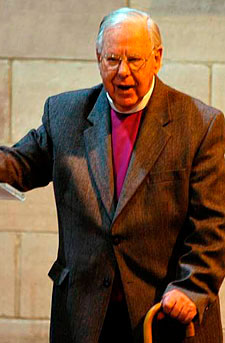 Sir Marcus himself reflected that he had never "retired' from ministry.
"I trust that the Lord who began a good work in me will continue it until the day of our Lord Jesus Christ," he said with conviction.
Sir Marcus was born in Tasmania in 1911.
He studied at the University of Sydney and Moore Theological College, and was ordained in 1935.

He also served in the armed forces in Papua New Guinea as chaplain to the Australian Imperial Forces from 1942 to 1944.
In 1958 he was consecrated as a bishop.
Sir Marcus was well known for his engaging preaching and prolific writing.
Sir Marcus and Lady Patricia Loane have been members of St James', Turramurra for the past 27 years. 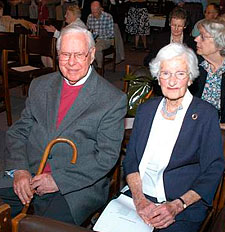 When Sir Marcus and Lady Patricia celebrated 71 years of marriage on December 30, 2008, he spoke of a lifelong love and an enduring partnership.
"The greatest prize I ever won was the heart of the noblest girl I ever knew," he said in January last year.
They have four children " Mary, Robert, David and Winsome " 17 grandchildren, and 23 great-grandchildren, with another soon to be born.
Details of a memorial service will be released later this week.