Nepali Christians die in their churches 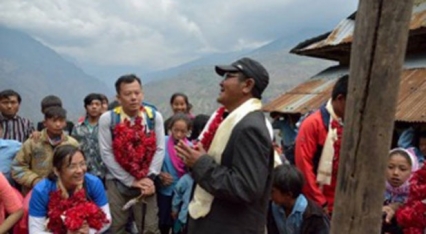 It's been revealed hundreds of Christians died or were injured as the Nepal earthquake hit their churches, including an Anglican minister and 17 of his parishioners.

In Nepal, Sunday is a work day so Christians normally attend church on their day off, which is Saturday. So many were in church when the quake hit on 25th of April.

Rev Lewis Lew, the Dean of Nepal which is under the oversight of the Diocese of Singapore, has issued a confirmation of a tragic scene in the village of Choke.

The village was recently visited by a mission team from Singapore.

"It is my deep regret to inform you that we have received confirmation that one of ours,Pastor Laxman Tamang and 17 of his members from Choke Church were called home to be with the Lord on 25 Aprril, Saturday when the quake struck the village of Choke in Dhading district." Mr Lew said in a prayer letter. "Pastor Laxman pastors a 340 member church. He loved the Lord, and had spent more than half his life in the ministry. Under his leadership Choke Church became part of Anglican Church of Nepal 15 years ago. Part of the reason why the Singapore team went to his village was because his heart was for the salvation of his fellow 11,000 villagers who have not given their lives to Christ."

The Archbishop of Sydney's Anglican Aid on Monday opened an appeal for the victims of the quake.  Tax deductible donations for the Nepal Disaster Relief Fund can be made here. After consultation with CMS Australia funds will be disbursed through International Nepal Fellowship (INF) and the Diocese of Singapore.

The quake, measuring 7.8 on the Richter scale struck the mountain Kingdom between the city of Pokhara and the capital Kathmandu. 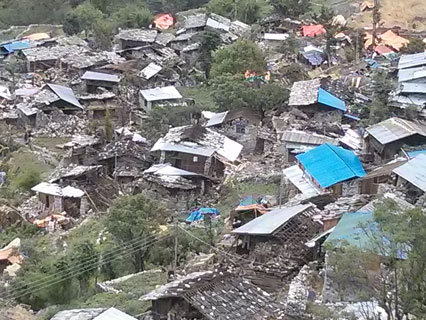 INF Nepal Director Prem Subedi reports “Our team is back from Ghurka and we now have more information about the situation in both Ghurka and Dhading. The need for food and other non-food items is enormous. So here in Pokhara INF is preparing food and non food packages to send out. And our medical team is in standby mode. At the same time we are considering how we might be able to contribute in the long run, using our skills as a health and development organisation to respond to the more long term situation. Please be praying for our immediate and longer term response, for good information and wisdom in decision making. Pray also that food can reach those who need it most."

The team has also reported on a swine flu outbreak in the area of Jajakot.

Photo: Pastor Laxman (with cap) welcoming the team from Singapore