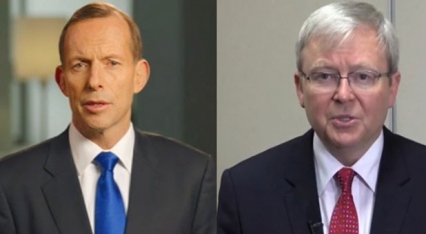 Prime Minister Kevin Rudd and Opposition leader Tony Abbott have headlined a national webcast to churches, just five days ahead of the election.

Both leaders sent video messages customised for a Christian audience and touching issues which church leaders have signalled as important.

Kevin Rudd spoke first, on the defensive over his u-turn on gay marriage and defending his (and Julia Gillard's) record.

He spoke of Labour's disability care programme saying "I believe this to be is the hallmark of a caring and christian society.." 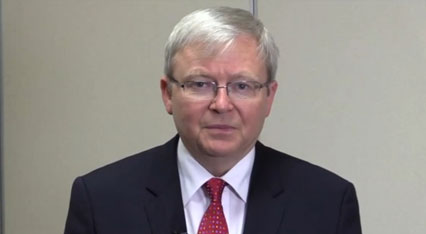 Mr Rudd also hailed ALP achievements in education and said his government had a plan to "steer us through the difficult economic waters that lie ahead."

The PM described Australia as 'a light to the world and light on a hill.....I believe we can be a great force for good in the world."

The Opposition leader started by praising Christians for their good works in the community.

"On any day, all around our country, people from churches are teaching students in schools, running hospitals, caring for people in difficult circumstances and making our country a better place" Mr Abbott said."I honour the good works you do every day right across Australia."

Mr Abbott acknowledged his opponent "The prime minister and I share many beliefs, we both share a personal faith....." but he said the electorate was facing a serious choice.

The Opposition leader said he would "end the assault of red tape on charities" a reference to Labour's charities watchdog. He also foreshadowed he would not proceed with Labour's changes to the fringe benefits tax which the Salvation Army said would cost it $4 million a year - the equivalent of nearly half the money raised by the Red Shield Appeal.

He also signified he would elevate the indigenous affairs portfolio to the department of Prime minister and cabinet, would not 'water down' a ban on online poker and would intervene to stop the proliferation of gambling odds broadcast during sporting telecasts.

On refugees, Mr Abbott said the coalition would build and maintain a strong border protection policy, "not only would it stop the deaths at sea but it is essential to the integrity of our humanitarian and refugee programmes." 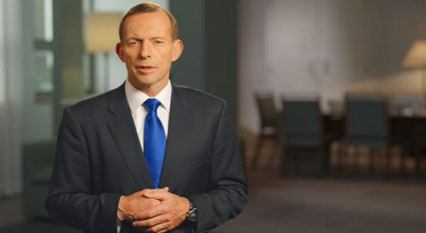 On gay marriage, the Opposition leader declared "My personal position has not changed. I believe marriage is between a man and a woman." But, he said "If the matter of same sex marriage does come up it will be a matter for the party room."

Both addresses lasted around 3 minutes and are available on the ACL website.